Thank God for morons. Without them we wouldn't be able to share stories like this one from over in Waterloo, Illinois.

Police say Tuesday night Andrew J. Schneider, 29, and Trent J. Gilliam, 35, drove a truck onto the lawn of the Monroe County Courthouse and hooked it up to an industrial barbecue grill that the Monroe County Pork Producers had just used to barbecue 500 pork steaks and 1,000 bratwurst.

As the participants at the barbecue mingled on the courthouse lawn, Schneider and Gilliam took off with the brand-new, $10,000 grill in tow. 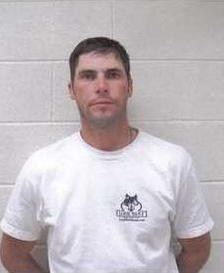 "They just rolled it right off the curb, hooked it to their truck and took off," Waterloo Police Chief Jim Trantham told the Bellville News-Democrat today. "We're not dealing with 16-year-olds that thought they'd pull a stunt."

Next time, though, the bandits might want to consider stealing a grill used to cook less fatty meat.

That's because police were able to follow a five-mile trail of grease from Waterloo toward the nearby town of Valmeyer, Illinois.

The two men were charged yesterday with felony theft. Each posted $10,000 bond and was released from the Monroe County Jail.

Here's the complete description of the incident per the Waterloo police:

On June 16th while our annual Porta-Wesfalica Fest was in full swing on the Monroe County Courthouse lawn in the middle of someone stole a 16' grill trailer (stainless) worth $9995.00. The grill is owned by the Monroe County Pork Producers and was being used for the first time to grill pork steaks and brats.

The grill had been shut down for the night and at approximately 9:47 pm we received a call that the grill had been hooked to a pickup truck and stolen. The grease trail from the trailer led West out of on IL Rt. 156 and a short time later a Valmeyer Officer observed the truck/grill after he was notified by a witness. The Valmeyer Officer and three Monroe County Deputies stopped the truck/grill at HH and in rural .

Two subjects, Trenton J. Gilliam 35 and Andrew J. Schneider 29 of rural were arrested and charged with Theft over $300.00 (Felony) and incarcerated at the Monroe County Jail. They were released on the 17th on $10,000.00 bond (10% applies) so both posted $1000, 00. cash bond as set by a judge. The grill was returned to the Monroe County Pork Producers that same evening.