A Squirrely Gift for Father's Day

June 19, 2009 at 2:15 PM
comment
Yes, it's that time of year again that Unreal dreads so much: Finding the perfect Father's Day gift for the old man. There are only so many golf balls you can get a guy -- and the idea of giving your father balls...okay, let's not take that road any further.

The Big Mouth Billy Bass fad has totally run its course. If Dad doesn't already have a fish that sings "Take Me to the River", face it, he never will. There's always a nice, manly book about war or the Presidents, but David McCullough hasn't had a book out in a few years now and the John Adams miniseries was last year's gift.

In his workshop in Mitchell, Illinois, just off I-270, taxidermist Rick Nadeau specializes in dressing and mounting squirrels. Dead squirrels. 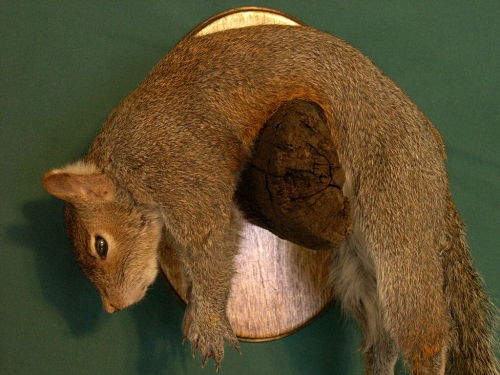 
I can mount any squirrel in just about any position or style you would like, just let me know what you may be interested in. I purchase vintage items such as clothing, weapons, hats, instruments, and just about anything you would like to have mounted.

Nadeau tells the Chicago Tribune that, in his 20-year taxidermy career, he has mounted about 800 custom squirrels in costumes ranging from Al Capone to a soldier in a little Sam Browne belt to one particularly demonic-looking little fellow with protruding teeth and red eyes. Nadeau's wife sews all the clothes. Many of the squirrels pictured on his site appear to be avid smokers.

Perhaps his greatest masterpiece is a squirrel in full engineer regalia playing a fiddle, which he custom-made for a children's book writer. A cursory glance at Ebay confirms that Nadeau's work is far superior to that of the average squirrel-mounter.

Nadeau does not actively contribute to the slaughter of any squirrels. He advertises for them on Craigslist and stores the pelts in his freezer. He favors the common gray squirrel and also the fox squirrel.

Mounted squirrels, like most great art (or kitsch), do not come cheap: A chest mount is $125, while a full-body mount will run you $155. Custom mounts are subject to negotiation.

But isn't it worth it for Dad, the man who contributed the sperm that gave you life?