All-Star Game May Only Be the Beginning; St. Louis In Running For World Cup

June 18, 2009 at 1:24 PM
comment
You'd think St. Louis would be happy -- or overwhelmed -- enough with hosting this year's MLB All-Star Game to look forward to a return to global obscurity. Or, at the very least, we should pay closer attention to how Chicago is making a fool of itself in its 2016 Olympic bid.

But no. Our fair city, and the Edward Jones Dome, have made a shortlist of 45 venues in 37 cities to host the 2018 or 2022 World Cup, the St. Louis Business Journal reports.

You mean the Edward Jones Dome will still be standing in 2018? Sigh. 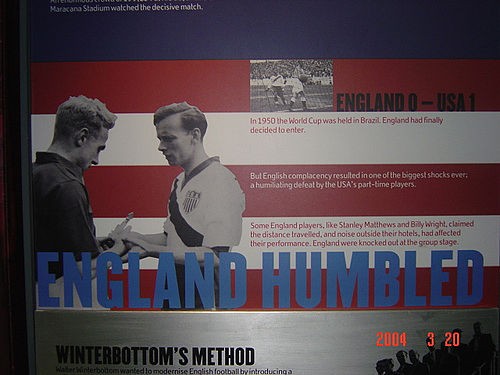 This is, of course, nowhere close to being a done deal. First FIFA, international soccer's governing body, has to choose the U.S. to host the World Cup. (But why would they not? Americans almost took an interest in soccer back in 1994. They liked shouting "Gooooooaaaal!") Then St. Louis will duke it out with the likes of New York and Fayetteville for hosting privileges.

None of these cities, though, have a soccer history quite as glorious as ours'. Specifically the game in the 1950 World Cup when a scrappy U.S. team comprised largely of St. Louisans beat much-favored England in the semi-finals. There's even a movie about it.

That does seem a long time to wait. But Chicago, in an evil plot to get St. Louisans to actually care about its Olympic bid, has generously offered to house a few preliminary soccer matches at the Jones Dome in 2016. So we'll keep holding our breath. And hope that Ballpark Village will be finished by then.