Last night was the debut of Joe Buck's new show on HBO, called, appropriately enough, Joe Buck Live. Now, let me get this out of the way at the very beginning: I'm a fan of Joe Buck. I've always enjoyed listening to him call a game, whether that be on television or on the radio. He isn't his father, but then again, who is?

With that said, I also want to say this: I'm a little bit tired of Joe Buck.

See, on the first episode of Buck's show last night, he had on, among other luminaries, Artie Lang. You may remember Lange from either his time on The Howard Stern Show, or, if you're like me, from his Oscar-worthy performance in a little something called Dirty Work. Okay, so maybe that wasn't exactly a cinematic masterpiece; that's not really the point, now is it? 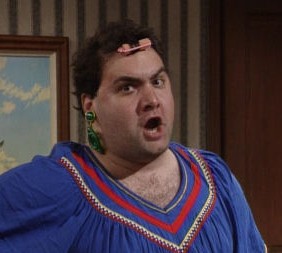 The point is this: Buck made a point of going in a very certain, very specific direction with his first show. He had on Brett Favre, who dropped the bombshell that yes, he may be considering playing again, but can't really guarantee it. Shocking! He had on a couple of actor dudes, including Paul Rudd, who I really do like, but have to wonder how he hasn't aged any since making Clueless. (Seriously, has anybody seen Alicia Silverstone recently? She looks like Liz Phair, except not as hot. Or talented. But somehow, Rudd hasn't changed. Like, at all. I wonder if he's an android of some sort?)

In short, Joe Buck invited on the type of people you invite on when you're a half-serious sports guy, half pop-culture maven.
It was a good mix, frankly, and an entertaining one.Things took a nasty turn, however, right around the minute and a half mark of Lange's eight-minute segment, when he started tossing around obscenities and insulting Jessica Simpson. He called Simpson fat, called Tony Romo a homo -- which I totally support, by the way, though I do worry about the gay community being characterized as wildly overrated chokers -- and just generally did what Artie Lange does.
What sucked, though, was Buck's reaction to the whole thing. He talked later about how painful Lange's segment was. He said he couldn't wait for it to end. Said he thought Lange had an agenda, whatever that means.
So let me get this straight, Joe. You invite a comedian who regularly contributes to Howard Stern to come on to your live show on HBO, where there aren't really any lines to cross, and then wring your hands and act appalled whenever he does exactly what everyone expected him to do?
Of course, the whole thing was really just meant to stir up some attention; and really, it's working pretty well so far. After all, I sort of doubt I would be writing this right now if Buck had just featured a couple of newspaper columnists. But at this point, Buck's schtick of playing both sides is getting old. Deadspin's Tommy Craggs described the act thusly:

"This is a crazy, mixed-up world, the show seems to say, and through it travels Joe Buck, a little bewildered but weathering it all with plain, homespun values and bone-dry wit."


I really couldn't have said it any better myself. And I further have to agree with Mr. Craggs: that act is mighty old and stale by now. Look, Joe, I appreciate what you're doing here; I really do. But we already had Garrison Keillor doing exactly what you do, and we nearly ran him out of the country. Do you want to move to France, Joe? Is that really what you want, to have to go live with French people?
Of course it isn't. Nobody wants that. Hell, even French people don't really like living with French people. So Joe, take a bit of good advice, and can the small-fish-in-a-great-big-pond act; you haven't been that guy since you were in your mid twenties. It was a good show, and you did a good job with it. You've done a good job with most things you've ever tried, to be honest. But if I want moralizing, I'll go to the little Lutheran church just down the road, a fine old place, with white clapboard siding and a marquee outside that's always inviting folks to sit in for a bit of the good news. Back in '54, that church had a great big bake sale, biggest the folks in town had ever seen, and-
Son of a bitch! See, now you've got me doing it too! This is all your fault, Buck. Now knock it off.