June 15, 2009 at 2:05 PM
comment
There were seven wonders of the ancient world, all but one destroyed. There are three goat towers in the modern world and all of them still stand.

In the words of Shelley's Ozymandias: "Look on my works, ye Mighty, and despair!"*

Now, it must be said that the most kick-assingest goat tower is the one at the Fairview Wine and Cheese Estate in Paarl, South Africa, because it was the first goat tower ever constructed, back in 1981, and because it is on a wine and cheese estate.

But the goat tower with the most kick-assingest name is the Tower of Baaa, in Findlay, Illinois, a scant 131 miles and 2 hours and 41 minutes from St. Louis, Missouri, via Interstate 70.

(For the record, the third goat tower is in Norway, or maybe Portugal.)

The Tower of Baaa is a labor of love, constructed by farmer David Johnson, with help from the late Jack Cloe, for his herd of 34 Saanen milk goats. It is 31 feet tall, 7 feet in diameter, made entirely from 5,000 hand-sculpted bricks and topped by a copper roof, steeply pitched to keep birds from roosting. (Because it's a goat tower, not a bird tower.) 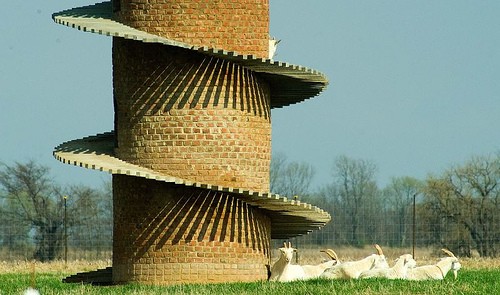 The tower has six floors, which the goats navigate via 276 concrete steps which spiral up the outside wall. There are three openings on each side. Johnson clears out the interior every six months or so with a high-pressure hose and uses the manure as fertilizer.

"Goats are the most curious animals in the world so they use the tower a lot," Johnson told Farm Show magazine. "They come and go, passing each other on the ramp as needed."

Farm Show reports that there have been no goat casualties as yet. In the winter, Johnson uses a portable torch to melt ice on the steps.

In the future, Johnson plans to open up a door on the roof and maybe bring in a telescope in and use the tower as an observatory.

A blogger who calls himself PawPaw says he kept goats during his "Mother Earth period" and thinks the goat tower is a wise idea:

"You're not going to keep a goat in a pen unless the goat wants to stay in the pen," says he. "Goats are notorious for jailbreaks. They're fairly smart and they'll figure a way out of a pen. When the goats get out, the best place to look is high. Goats like to climb." 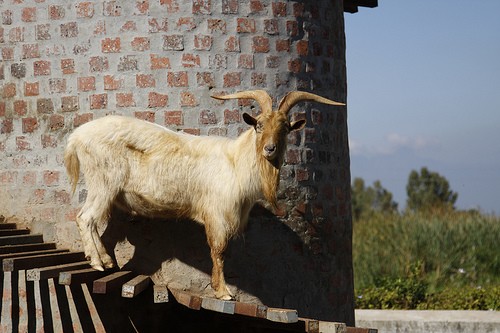 Unreal will have to take his word for it, since we have no experience with goats aside from eating their cheese (mmmm) and maybe trying to pet one at a petting zoo a long time ago.

As far as Unreal can tell, goats and small children are the only livestock fortunate enough to have their own towers. There is, however, a really stupid computer game called Cow Tower (it involves cows and milk-collecting paper airplanes) and a British ska/funk band called A Tower of Sheep.

* Unreal had to read a lot of poetry in college. Please let us indulge the fantasy that this time was not ill-spent.