RFT Writer to Appear Friday on KMOX Regarding Dissapearance of Boy, 9 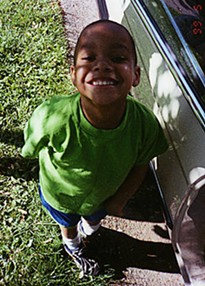 Christian Ferguson went missing six years ago Saturday. He was nine years old. His father, Dawan Ferguson, told police that his son -- and his SUV -- were stolen from a parking lot in north St. Louis, while Dawan was using a payphone. The SUV was recovered a short time later but without the boy inside.

RFT writer Kristen Hinman reported on the circumstances around the boy's disappearance -- as well as his rare illness and turbulent family life -- in March. Less than a week since the sixth anniversary of his disappearance, Hinman will update the case with Charlie Brennan on KMOX during the 10:10 a.m. segment on Friday.

There was a memorial parade for Christian Ferguson on Saturday to raise awareness of this case and to honor the boy.

If you haven't read the story, featured in two parts, you can do so here:

Vanishing Act, Part 2: Missing since 2003, little Christian Ferguson is almost surely dead. Police think they've fingered the culprit -- and there's nothing they can do about it. A Riverfront Times Special Report.