In case you missed it -- and Lord knows why you would -- Mark Ebner's literary masterpiece, Six Degrees of Paris Hilton: Inside the Sex Tapes, Scandals, and Shakedowns of the New Hollywood, which came out last February, reports on the life and times of gangster Darnell Riley and includes plenty of salacious anecdotes about everybody's favorite Hardee's shill.

But guess what? There's more! In honor of the premiere of the second season of Paris Hilton's My New BFF, Ebner has thoughtfully posted on his website a "lost" chapter entitled "The Ham Whisperer" that was spiked from his book for "editorial reasons." (Before you click on it, beware: some of the images are not really safe for work.)

Unreal is sure you were waiting for it as breathlessly as you have been for the recent works of J. D. Salinger. No, wait...

Though the chapter centers on Bill Clinton's BFF Ron Burkle and hookers, St. Louis' very own "Augie Busch III" makes a few special guest appearances. (Confidential to Mark Ebner: Are you sure you weren't off by a Roman numeral there?)


"With Paris it was very low key. She would fly down and I was there with them. We would party pretty hard. Paris got naked, and the girls would get naked. This was mainly in Vegas. There were times where you would have Ted or Ron come down, and they would pretty much pay for girl-on-girl action. I'd be there. And they'd pay to watch us girls going at it. And they'd bring in Augie Busch III."

Some of the girls, including Hilton, came courtesy of a pimp named David Reich:


"He was fat," says Louis Ziskin [a drug smuggler] from prison. "A lot of big guys can carry his kind of weight, but he is sloppy fat. Feminine fat; saggy fat. He has dark, thinning red hair, but it was blow-dried, and he had more M-A-C cosmetics for personal use than most chicks that I knew. He did have access though, and he was a player in his day. He moved chicks to Ted Field, Ron Burkle and August Busch. These dudes fuck these chicks and then they get him to get rid of them. Then he babies them, washes their faces and puts makeup on them. He catches them when they are vulnerable.

"Reich sees Kristen out in the brand new Mercedes I bought her. He goes up to Kristen [Williams, a model/actress, or "mactress"] and says, 'Hey, Ted Field wants to date you again.' Let me put it this way: I almost had to deal with that cross-dresser. He's not even a good pimp. He's an errand boy for Burkle and Fields and those guys. The only reason why they don't kick him to the curb is because he has the dirt on them." 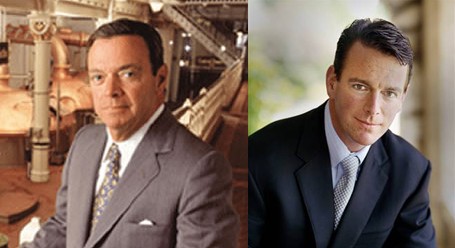 Why did this hard-hitting reporting not make it into the book? Unreal would like to venture a guess: Burkle, Field and Busch have way more dough to invest in legal fees than Ebner ever will, especially since his book currently ranks at 19,590 on Amazon's sales rankings.

Not to mention that Burkle and the FBI successfully took down Jared Paul Stern of the New York Post. And if Busch (the fourth one, anyway) can coolly sell out his family's brewery and risk the wrath of hundreds of thousands of St. Louisans, one reporter should be no problem.