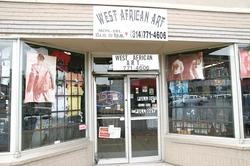 According to the indictment, between September 2005 and February 2009, Frango sold counterfeit goods at both store locations, including goods bearing the trademarks of Nike, as well as numerous other clothing companies.

In September 2005, a representative of several clothing manufacturers learned that Frango was selling counterfeit/knock-off Nike brand shoes at West African Art. The representative provided a cease and desist notice to Frango and his business. However, Frango did not stop selling counterfeit goods, and additional investigation revealed that he was also selling them at his F & A Fashions location.

In March 2008, based on information that the West African Art store continued to sell counterfeit goods, the St. Louis Metropolitan Police obtained a search warrant  and discovered a semi-tractor trailer load of counterfeit goods.


Among the counterfeit goods seized from the businesses were items bearing the marks of numerous manufacturers, including Apple Bottom, Polo Ralph Lauren, Coach, True Religion, Timberland, Baby Phat, Roca Wear and many others. The total infringement value of the seized goods exceeds $1,000,000.

Due to the volume of contraband goods, the Department of Homeland Security, Immigration and Customs Enforcement became involved.  Subsequent investigation revealed that Frango had multiple Missouri identification cards, as well as bank accounts and business facilities if different names.  There investigation let to the seizure of two more trailer loads of counterfeit goods.

"Counterfeiting is not a victimless crime and this type of activity should concern every American," said James Ward, resident agent-in-charge of the ICE Office of Investigations in St. Louis. "Counterfeit goods cost U.S. industries billions of dollars in losses each year, and the illicit proceeds often facilitate organized crime. ICE is committed to investigating and dismantling those organizations that deal in counterfeit goods."

Frango, 51, of University City, pleaded guilty to one felony count of trafficking in counterfeit goods, before United States District Judge Charles A. Shaw.