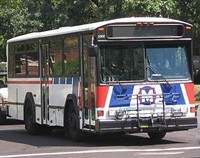 U.S. Rep. Russ Carnahan (D-St. Louis) filed a bill in Congress yesterday that would allow public transit agencies such as Metro to use federal transit funding for day-to-day operating expenses.

Under current law, transit systems located in areas with more than 200,000 in population must use federal transit funds for capital improvements and not operating assistance. Carnahan's bill (H.R. 2746) would remove that barrier and allow transit systems of all sizes to use transit funds to plug budget holes to keep service on the streets.


Metro is not alone. Transit systems across the country are currently experiencing a financial crisis like never before and being forced to cut services and jobs...Local transit agencies need options as they experience record-high ridership and record-high costs.

In March, Metro cut bus service by 44 percent, MetroLink service by 32 percent and Call-A-Ride by 15 percent to help offset a $50 million budget deficit.

Last month the Missouri legislature forwarded to Governor Jay Nixon a $23-billion state operating budget that includes $12 million from the American Recovery and Reinvestment Act to restore one-third of Metro's closed routes. Those federal funds were emergency stabilization funds and not directly allocated toward mass transit but designed to help states alleviate state budget shortfalls in areas they see as fit. Nixon has yet to sign the bill, though he's expected to soon.

In fiscal 2008, Metro received $220 million in federal transit funds for capital projects, according to a state audit. By comparison, the agency received just $26 million that year in other federal assistance to aid operating expenses. Passenger and service fees in fiscal '08, meanwhile, accounted for just $58 million (or one-fourth) of the agency's $235-million operating budget.

Correction: Metro spokeswoman Dianne Williams called to point out a couple inaccuracies to this post as originally published. First, Governor Nixon has not yet signed the state operating budget as originally reported. Also, Metro received $220 million in federal transit funds for capital improvements in fiscal 2008 and not $222 million. We regret the errors.