June 08, 2009 at 3:15 PM
comment
The Rev. Larry Rice made headlines last week when the the government denied his controversial request to convert a federal court building in Cape Girardeau into a homeless shelter. Now Rice says he plans to sue for the rights to the building.

Meanwhile, here in St. Louis, Rice's New Life Evangelistic Center continues to come under attack from downtown residents concerned with the behavior of those staying at his shelter at 1411 Locust.

Leading the charge against Rice is Andy Martello (profiled here last August). On Friday, Martello -- who lives on nearby Washington Avenue -- sent Daily RFT this photo of a fight that occurred last week behind New Life. 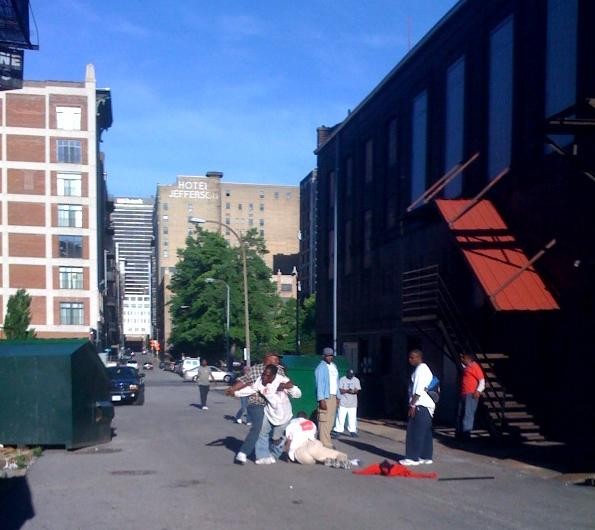 Martello relays that the fight appeared to involve several residents of New Life who left behind a bloodied, metal pipe following the skirmish. But that's not the worst of it, reports Martello.

"The biggest concern I have are the cops attitudes," he continues. "When I was assaulted, the cop told me, "Just go home."  When I asked for his badge number, he later apologized.
I'm thinking that we have an extremely demoralized police force as they are under constant attack by the Post-Dispatch, the citizens, and actually under fire by some people.

"This is really getting ridiculous."