The Big Bloody: Man Charged in Murder of Centreville Cop 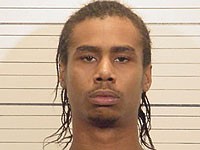 Houston allegedly killed Jonas because he did not want to get booked on a gun charge. Jonas had stopped Houston in the early morning hours outside the Elder Smith Senior Apartments in Centreville while on patrol. Houston is apparently well known to Metro East law officers.

He is being held in undisclosed location to ensure his safety. Bond has been set at $10 million.