By the Boards: Dennis Brown on the STL Theater Scene June 5-7

June 05, 2009 at 7:54 AM
comment
Like ships that pass in the night, this week some theater companies are concluding their seasons as others are just revving up. It makes for an unusually eclectic mix. 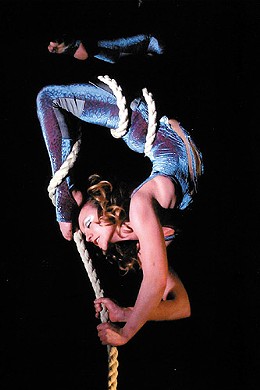 St. Louis Actors' Studio wraps up its second season with a homegrown play. Outside the Lines is a one-act drama by Gerry Mandel. Set in "a Midwestern city," the story dramatizes the plight of a Bosnian woman who tangles with the powers at city hall over her daycare center. In recent months Mandel has been working with the six-actor cast and director Sara Renschen to give the piece an organic feel. Last May Actors Studio took this same workshop approach to an original script called Snapshots; the result was edifying.

On a somewhat grander scale -- at least in terms of numbers -- Clayton Community Theatre is staging an adaptation of the popular C.S. Lewis novel The Lion, the Witch and the Wardrobe. The fabled Narnia will come to life in a grandiose production employing a cast of 48 actors. CCT tends to offer more substantive fare than some of the other local community theaters. Of late they've staged plays by Edward Albee, Peter Shaffer and Tennessee Williams. That alone makes this a company worth monitoring.

Albee will make two more appearances this month. Everything in the Garden is an American adaptation of a British stage play by Giles Cooper. In the original 1967 Broadway production, Albee reunited Barbara Bel Geddes and Barry Nelson, the two leads from the innocuous long-running comedy hit Mary, Mary. This plot (which concerns prostitution as a means to fast cash) was not so innocuous. New York audiences were not amused by the casting duplicity. The show ran for 84 performances and essentially vanished. But it's a well-written play that might well find a more appreciative audience today.

The following week, The Lady from Dubuque -- which eked out twelve performances in 1980 -- will be staged by Muddy Waters as the third and penultimate entry in its season devoted to Albee. (Who's Afraid of Virginia Woolf? awaits us in November.) This too is rarely seen (although two years ago Maggie Smith played the title role in a brief London revival). If you're looking for something off the beaten track, Dubuque is about as off as you can get.

Speaking of beaten tracks, the Lyceum Theatre in Arrow Rock opens its season this week with the pop musical Hairspray. There's no more enjoyable place to see a show than in this tiny, perfectly manicured town that is listed as a National Historic Landmark. Hairspray will close the Muny season in August, but here's a chance to see it up close -- and with old-fashioned ice cream cones just around the corner.

Finally, it should be noted that Circus Flora returns to Grand Center for its 23rd season. Even before it opens, we can predict with authority that this one-ring, European-style circus will provide the most thrilling theater in town. When Circus Flora is in town, June is the fastest month of the year. Theatergoers who prioritize should not tarry.