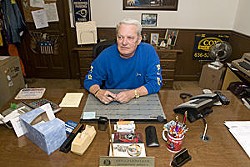 The saga of St. Charles-based bail bondsmen Jerry and Jim Cox took another dramatic turn yesterday, when the pair filed a civil lawsuit against the City of Maryland Heights and three members of its police department.
The father-son pair alleges that Maryland Heights police falsely imprisoned them, then issued statements to the media and shared information with other local officials that defamed their business, Cox Bail Bonds, resulting in losses of approximately $174,000.
You can download the full complaint, filed yesterday in Eastern Missouri federal court.
The suit -- which also includes allegations of malicious prosecution and conspiracy to violate civil rights -- stems from an incident in November in which a team of bounty hunters hired by Cox Bail Bonds burst into a hotel room in Maryland Heights to apprehend a fugitive, Leah Pinion, for whom the company had recently issued a bail bond.
Pinion's boyfriend, Lance Peabody, had put up his home as collateral for the bond but withdrew from the deal, leaving Cox on the hook for $30,000 until Pinion was apprehended. When the bounty hunters found Peabody hiding out with Pinion, they handcuffed him, commandeered his BMW and drove him to Jerry Cox's office at 3 a.m. There Cox informed Peabody that he had to pay $5,500 to cover the cost of the bounty hunters, a fee that was included in his original contract.
Peabody told Maryland Heights police that Cox, 65, toyed with pistol during the conversation, and said, "[N]obody has ever ran from me and gotten away." Peabody also claimed Cox threatened to sell his house to pay off his debt and to turn him over to police to be charged with aiding and abetting a fugitive.
Maryland Heights police arrested the Coxes (along with the bounty hunters) on November 25 and charged them with felony kidnapping, theft, burglary and tampering with a motor vehicle, as well as failure to inform law enforcement of a fugitive apprehension, a misdemeanor.
All of the charges were dropped on April 27.
Shortly after the Coxes were charged, Maryland Heights police contacted St. Louis Circuit Court Clerk Mariano Favazza and informed him of the situation. Favazza moved to ban Cox Bail Bonds from operating in St. Louis, citing the fact that the company was no longer "reputable." Cox, in turn, sued Favazza, claiming the court clerk did not have the authority to make such a distinction. That case is pending.
Several neighboring counties followed Favazza's lead in blocking Cox Bail Bonds from operating in their areas, leading the Coxes to conclude that they lost $174,000 as a result.
Reached by phone, James Cox referred press inquires to his attorney, Larry Bagsby.
"This whole thing happened because of the bounty hunters," Bagsby says. "They apparently thought [Peabody] had somehow broken the law too, so they took him to the Cox Bail Bonds' office in St. Charles and that's what caused the whole stink."
In their lawsuit, the Coxes allege that they did not instruct the bounty hunters to apprehend Peabody and that they were in fact "independent contractors" operating beyond Cox's control.
The complaint says Peabody's $5,500 debt was eventually paid by his mother, Arlene Taylor and states that, "Ms. Taylor also thanked both Gerald and James Cox for their patience for not executing upon her son's house, and, delivered what she characterized as her award winning banana nut bread."
The Coxes claim that the lead investigator in the case, Maryland Heights police lieutenant Joe Delia, conspired to fabricate charges against them because he holds a grudge against James Cox. The pair worked together from 2000 until 2004 on the area's Major Case Squad, when the younger Cox was a detective for the Florissant police.
"My guy made it clear he thought Delia was a pretty incompetent investigator," Bagsby says.
In 2004 James Cox served a year in prison after pleading guilty to felony conspiracy charges for twice planting drugs and evidence on a woman who was going through a divorce with one of his associates.
Delia did not return a phone call inquiring about the lawsuit.
The elder Cox, a former state representative, was once the target of a murder-for-hire plot orchestrated by a rival bail bondsman named Virgil Lee Jackson. For more on that case, read the RFT feature story "Birds of a Feather: The Strange and Violent World of St. Louis Bail Bondsmen," published in April 2008.