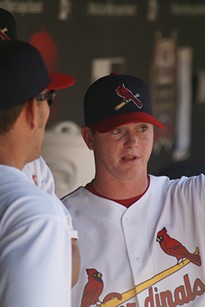 Okay. the verdict is in. We finally have an answer.
After much debate, much discussion, and a fair bit of research which made me question my sanity, as well as whether or not the word option actually existed in baseball, the answer finally came from the most obvious, and easiest, option of all: the Cardinals themselves. (Like the option pun there? That's why I make the big bucks.)
According to Brian Bartow, spokesman for the Cardinals, Brad Thompson does, in fact, still have an option remaining. In 2008, he was disabled, then optioned down, but due to injury, he was recalled within the normal ten day period during which an optioned player is ineligible to come back to the majors, and the option itself was waived in this case.
The full transaction record reads thusly:
28 April, 2008: Placed on 15 day DL (right elbow inflammation)
19 June, 2008: Activated, Missed 47 games (right elbow inflammation)
21 June, 2008: Optioned to Memphis (AAA)
30 June, 2008: Recalled from Memphis (AAA)
The official reason for the move was Mark Mulder's abbreviated start, when he returned to the mound for the first time in 2008 and left the game in the first inning. On the 27th, they had activated Mulder, activated Albert Pujols, disabled Randy Flores, and optioned Mike Parisi back to Memphis; when Mulder's return proved so disastrous, Thompson was recalled. I believe the official injury that actually allowed Thompson to return under the rules was that of Flores; Mulder himself remained on the active roster until the 11th of July.
So there you have it: no option used in 2008 due to the injury loophole. Thus, my calls for Thompson to be sent back to Memphis posthaste are even more compelling, as there is no need for him to be exposed to waivers.
My thanks to Mr. Bartow for clearing up the confusion.