June 01, 2009 at 2:42 PM
comment
So I'm sure by now that most of you have heard that Tony La Russa is the best manager in the game of baseball. He was so named in a column by Nick Cafardo, a writer for the Boston Globe.
Me? Oh, as usual, I have some pretty mixed feelings on the whole deal.
Following the announcement, there was a bunch of predictable chest-thumping among fans who think that La Russa is unfairly bashed by a lot of us media types, not to mention those of us who know that OPS isn't pronounced "opps."
Well, that whole thing was still fresh in my mind while I was watching the game yesterday, and I've got a point to make.
So apparently we now have a five-man rotation in the outfield, rather than the four-man rotation we've all come to know and, er, love. 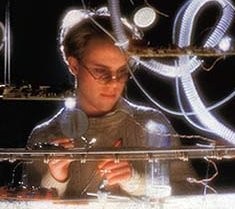 The problem is Schumaker was nowhere near the best option there. There was a lefty on the mound, which I'm sure was part of the reason that Colby Rasmus was held out of the lineup, but Skip is terrible at hitting lefties in his career.
For his career, Skip has a triple-slash line of .214/.283/.230. That's good for an OPS+ of 37. That's right. Thirty seven. Now, Skippy supporters will tell you he's been much better against lefties this season, and he has: .303/.361/.333. However, small sample size warnings most definitely apply: only 36 plate appearances against LHP this year. Perhaps he's improving, perhaps it's a fluke. The point is, Skip has been godawful in his career against lefties. Is Rasmus any better? We don't really know, as he's had only a fraction of even Schumaker's (somewhat), limited at-bats against lefties, but somehow I doubt he could be any worse.
Then there's the matter of defense. Skip is a very good left fielder, an okay right fielder, and a very bad center fielder. Never once in his career has been even average in center field, costing the team runs every time he plays there. In 2008, when he received a large percentage of the team's inning in center field (555.2 inning), Skip was worth 5.9 runs less than an average fielder in center by UZR. Adjusted to a full 150 games, that's -13.5 runs, or over one full win in the standings.
Rasmus, on the other hand, has been outstanding in center. By UZR, Colby has been worth 8.1 runs over the average center fielder in just 242.1 innings. Now, there is certainly a sample size issue there, and it's almost impossible he could keep that sort of pace up for the course of a whole year (The same would put him at +33.2 runs for 150 games, or over three full wins with the glove alone. That's almost impossible.), but it is a good reflection of what he has done so far with the time he's played in center.
So here we have a rookie who can chase down fly balls at a ridiculously good clip, and then we have Skip Schumaker, who regularly costs the team runs whenever penciled in with the number 8 next to his name. On top of it, Skip has been historically awful against left-handed pitchers, of which there was one on the mound. So the offense is likely no better than it would have been with Colby in, and the defense is substantially worse. You can't even claim the move was to get more right-handed bats into the lineup, as Joe Thurston started at second, and Thurston hits from the sinister side as well.
Then, in the fifth inning of what was a tied game, Tony went and one-upped even himself. Jonathan Sanchez, the Giant's starter, was removed from the game with one out, and Brandon Medders, a right-handed reliever, came in. Attempting to take advantage of Medders' right-handedness, La Russa pinch-hit for Brian Barden with Chris Duncan. Now, is that a defensible move all by itself? Yes, it is. The fifth inning may be a little early to start making too many moves in general, but it was a solid opportunity for the Cardinals to put a crooked number up on the board, and Duncan was a decent choice to attempt to do so. Still, at that point, you've now removed your best defensive third baseman from the game and pinch hit for him with an outfielder, and by the way, your'e already playing with a short bench.
Duncan didn't come through, striking out, and the Cardinals failed to break the game open. Hey, no big deal, right? Opportunities come and go all the time.
What is a big deal, though, is that Colby Rasmus, the man who probably should have been starting in the first place in center field, then came in to play center, replacing Chris Duncan. Schumaker moved to second base, Thurston moved to third. So, to review: the defense in center improved markedly. The defense at second got worse, the defense at third got worse, and oh yes, you just burned two players off of a four man bench to make it happen.
See, this is how things work with La Russa: all the small moves, taken on an individual basis, are totally defensible. Well, mostly defensible. Using Duncan to pinch hit there was an okay idea. Moving Rasmus to center to replace Skip was certainly a good idea. Trying to keep Schumaker's bat in the lineup is understandable, even if it comes with a defensive downgrade.
The problem comes when you start adding all of Tony's moves up together. That's when you start to see all the issues that he himself creates. Sure, there are plenty of problems the team has to deal with, and Tony often does an admirable job of keeping things on the tracks. But at the same time, he creates a whole other category of issues for himself with his incessant need to feel like he's the most important man on the field. Burning half of the bench in the fifth inning of a tied game in order to pinch hit for one player is just the sort of thing that La Russa does on an almost nightly basis nowadays. The bench is short due to the thirteen man bullpen, because La Russa feels like he just has to have all these extra arms. He blows through said bench because he's obsessed with exploiting matchups that oftentimes comprise less than a handful of at-bats. And then, when it all blows up in his face, we hear about how many obstacles had to be overcome just to get within striking distance of a win, be it a game or a division.
So is he really the best manager in baseball? Oh, I don't know. Maybe, maybe not. But I ask you this: how brilliant is a man who can solve any problem if the problems he solves are his own fault in the first place?