How in God's Name are the Rams Worth Twice as Much as the Cardinals? 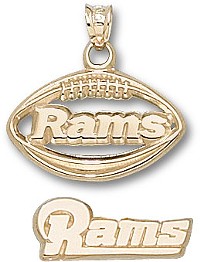 If somehow you haven't heard yet, the St. Louis Rams are up for sale to the highest bidder, leaving open the possibility that the franchise could move out of Missouri. Sports columnist Bernie Miklasz broke the news Sunday.

More interesting to me, though, was not that the team is up for bid (that's been inevitable since Georgia Frontiere's kids inherited the team last year). What's tough for me to swallow is that Forbes estimates the Ram's valuation at $929 million.

That's nearly twice the $486 million that Forbes estimates the baseball Cardinals are worth.

How the hell can that be? I know the NFL's television contract is worth billions and billions and the league has a much more generous revenue-sharing system than baseball.

But c'mon! The Rams? Worth nearly a billion dollars?

This despite the fact that the Redbirds are one of the most storied franchises in American sports and play 81 home games in St. Louis each regular season (in front of 3 million paying customers) vs. just 10 home games for the Rams (including the team's pre-season matches)!?

And the Cardinals also own their own radio station and stadium!! If I recall, the price-tag alone on the new Busch was over $400 million.

So, can someone out there please explain? I know all valuations are guesswork and something is only worth as much as someone is actually willing to pay.

Still, Forbes magazine seems to be way, way off on this one. What's next? Is the magazine going to estimate the value of the Athletica at half-a-bil?