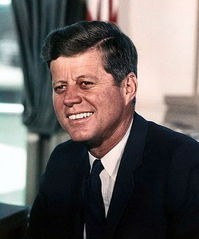 It seems it will always be John F. Kennedy's deathday in Dallas -- not his birthday -- that we will observe, and that which, even now, almost 46 years later, still fills a dark, anguished corner in the national psyche. JFK, the most famous initials of our lifetime. Strange that Lincoln's deathday goes by with barely a whisper.

But today is Kennedy's birthday, born 92 years ago at 83 Beals Street in Brookline, Massachusetts. Can you imagine, a 92-year-old Jack Kennedy?

Kennedy's made his final visit to St. Louis on September 12, 1962 in order to tour the Gemini space capsule construction site at McDonnell Aircraft Corp. In a speech to congratulate the workers, the 35th and youngest elected president said,

"I can imagine no action, no adventure which is more essential and more exciting than being involved in the the most important and significant adventure that any man has been able to participate in in the history of the world."

Kennedy was to have come again to St. Louis in October 1962, but the trip was cancelled at the last minute. The press was told that Kennedy had a cold, but the truth was a bit more sinister. Kennedy had just learned of the nuclear missile sites in Cuba.

Ten days before his 45th birthday, in 1962, a celebrity-strewn crowd of some 15,000 people gathered at Madison Square Garden to wish JFK a happy birthday. The highlight that magical evening was the appearance of Marilyn Monroe and her breathy, seductive rendition of "Happy Birthday Mister President."

In honor of Jack's 92nd, what say we give it a listen.