May 29, 2009 at 12:02 PM
comment
The time has come. The time is now.
Tonight we witness The Return.
Well, actually, those capital letters may be a little misleading. See, Ryan Ludwick is coming off the DL tonight, which is a pretty damned dramatic thing. However, seeing as how this team seems to constantly be welcoming some player or another back from injury, surgery, purgatory, or mental illness, it's probably just a plain old lower-case return.
Nonetheless, Ludwick coming back off the DL 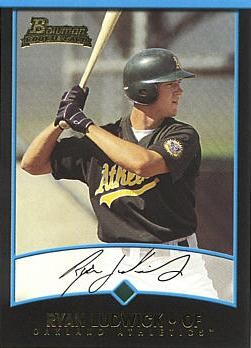 So in the spirit of making sure that this semi-momentous occasion is given the proper level of respect and- dare I say, seriousness- that it deserves, Ludwick the Studwick gets a Card of the Week.
How much of a difference has Ludwick's injury made in the Cardinals' offense? Tough to say, really, as lots of other things have gone wrong over the course of a rough May, but take this for whatever you think it might be worth: through the 12th of May, the day that Ludwick was injured chasing down a fly ball, the Cardinals scored 173 runs in 33 games, or right about 5.25 runs per game. In the 14 games since, the Cards have put up 44 runs, for a per game total of 3.14. That's painful. In addition, they've been shut out twice these past two weeks. In those first 33 contests, they weren't shut out at all. Only a truly transcendent run of starting pitching has allowed them to stay in solid shape.
So yeah, there have been plenty of problems with the Cards' roster; hell, I've complained enough about them that you should know by now. But hey, since Luddy's been gone, the Cardinals have lost two full runs a game. I'm not saying, I'm just saying, okay?