Hello, My Name is Bill Streeter and I'm Your New Technology and Social Media Blogger 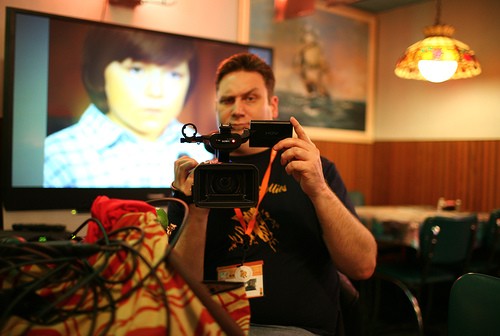 A couple of weeks back I got an email asking if I would like to be the tech blogger for the RFT. I didn't really hesitate to accept. Mostly because I like a new challenge, and also because I see it as an opportunity to expand my horizons beyond music, the topic I cover on my own blogs. Of course, the fact that it was the RFT asking helped a lot too.

So lets get some quick boring facts about me out of the way, I lived in Chicago for eleven years where I studied film at Columbia College. I moved to St. Louis in 2001 and I've made my living as a graphic artist for the last fifteen years. I'm married and have two sons who are 12 and 3 months. I have wide and varied interests including art, food, television, movies, music, politics and technology. I started my video blog Lo-Fi Saint Louis in 2005 as just one of a long list of little side projects I've had over the years but for some reason this one sort of caught on and got some notice. It's been featured in iTunes and I won a couple of awards for it, most recently was nominated for a Streamy award that I lost to William Shatner, which I consider to be a kind of award in itself.

I have to admit that I'm a serious geek and that I love the technology and the Internet. I love the possibility of it. I love where it's taking us. I love that it's making the world smaller. I love that it's making every little thing that you could ever possibly want to know available at your finger tips anywhere anytime. I love the fact that it's becoming the primary distribution network for all media. I think I loved the Web from the first time I saw it. And I think that it's only in the last few years that it's started to fulfill some of the hopes I had for it back when I discovered it.

But don't let all that love fool you. Just because I love the web and the Internet doesn't mean I love everything about it or that I believe that it's a panacea that will bring about Utopia. What makes it really interesting is the fact that ordinary people use it, and as it goes with anything that people are a part of there are things to be celebrated and things to be derided. The Internet isn't just one thing, of course. It's a lot of different things to a lot of people. And what I plan to do in this space is to explore and report some of the interesting things people in St. Louis are doing with it and critique or comment on some of the less interesting things they might be doing.

So hopefully you'll be compelled to seek out my posts here and I can help you discover some things you didn't know about our little corner of the Internet.  Oh yeah you can follow me on Twitter where my username is @billstreeter and you can find links to all my other activities online here.