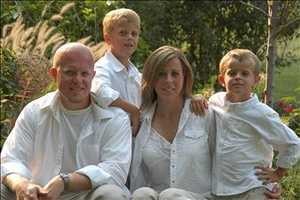 An Illinois judge yesterday released for the first time the police report and warrant related to the case against Christopher Coleman, the man accused of killing his family earlier this month.

In griping, Dragnet prose, Columbia police sergeant Jason Donjon reports heading to the Coleman home at approximately 6:50 a.m. on May 5 where he and another officer would find the strangled bodies Coleman's wife, Sheri, and two young sons, Gavin and Garett. Sheri's body, noted the police, already appeared to be in rigor mortis.

Donjon states in the report that Coleman had just called the Columbia police department requesting that they check in on his home. Coleman had received at least two threatening letters this year and was worried when he called his family early that morning from a south St. Louis County gym and got no answer.

One of the anonymous letters, dated January 2 of this year, stated: "(Expletive) you! Deny your God publically or else! No more opportunities. Time is running out for you and your family! Have a good time in India (expletive)!"

On April 27, Coleman allegedly received another letter that seemed to target Coleman's employment as a security guard for the Joyce Meyer Ministeries. The letter read: "(Expletive) you. I am giving you the last warning! You have not listened to me and you have not changed your ways. I have warned you to stop traveling and to stop carrying on with this fake religious life of stealing people's money. You think you are so special to do what you do protecting or think you are protecting her. She is a (expletive) and not worth you doing it. Stop today or else. I know your schedule! You can't hide from me ever. I'm always watching. I know when you leave in the morning and I know when you stay home. I saw you leave this morning. I will be watching. You better stop traveling and doing what you are doing. THIS IS MY LAST WARNING! YOUR WORST NIGHTMARE IS ABOUT TO HAPPEN!"

Donjon and detective Justin Barlow arrived at the home at approximately 6:52 a.m. After ringing the doorbell and getting no answer, Donjon walked around to the backyard where he noticed an open basement window.

"After searching the first story and finding no one we tactically went up the stairs to the second story of the house. As I walked up the stairs, I looked to my left and saw a white female, lying on her stomach on the bed. I saw her hair laid over her face. I saw she did not have any clothes on. I yelled, "Columbia Police!" and she did not move. I called for an ambulance. I searched the hallway and bedroom for anyone else but did not find anyone. I knelt down next to the white female and pulled her hair away from her face. I attempted to get a pulse from her neck but did not find one. I attempted to slightly roll her over in order to see her eyes and check for breathing. I noticed when I lifted her shoulder, her neck and head moved also. It appeared rigamortis [sic] has began to set in. I noticed the skin on her chest and head area appeared purple.

"I heard officer Patton tell the dispatcher he needed three amublances. Officer Patton yelled, "There are a total of three victims!" I walked in the rear upstairs bedroom and saw a young boy lying in the bed. I saw his face appeared purple. I checked for a pulse but found none. I walked to the front upstairs bedroom and saw a younger boy lying in his bed. I checked for a pulse on the younger boy but found none. I also noticed his face appareared slightly purple.

Detective sergeant Barlow, officer Patton and I completed a more completed search of the upstairs but did not find anyone."

In the search warrant, police reported taking swabs of scratches and injuries found on Christopher Coleman's right forearm. The police reportedly also seized orange twine that may have been used in the strangulations as well as a receipt for spray paint purchased at a Home Depot in July 2008 that was found in Coleman's travel bag.