Shots Ring Out on Cherokee: Part I

May 27, 2009 at 10:30 AM
comment
Editor's note: the author happened to be present when this incident occurred.

Within seconds, squad cars were funnelling in, 17-year-old Ledarius D. Williams lay face-down on the pavement, and the blue-shirted police officers who'd just wounded him were joined by others, all swarming the northeast corner of Cherokee Street and Texas Avenue.

Ah yes, from the same intersection that brought you both a garden-related political controversy and the federal indictment of a shopkeeper just last month, yet another Cherokee Street drama played out over Memorial Day weekend: the downfall of a youth who - as one officer put it to a resident - was already a career criminal.

A few minutes before the shooting, police say, a pair of officers had pulled over a car a few blocks south at Potomac and Texas for a traffic violation. When the car slowed to a stop, Williams and another young man swung out and sprinted away.

The cops immediately saw that Williams had a gun, and "recognized him from prior encounters with law enforcement."

Moments later, a couple of responding officers spied Williams - who had a white bandage covering one eye - standing at Cherokee and Texas gripping his 9mm semiautomatic. Police say they approached and ordered him to drop the weapon. Williams tried to pass it off to someone walking up the sidewalk, but the pedestrian wouldn't take it.

So, according to the report, the cops again told Williams to drop his gun. Instead, he walked into the middle of the street, his back to the officers, gun at his side.

Then, suddenly, he swiveled around and aimed at them.

Both officers fired, and one hit Williams in the knee. He fell down, and chucked his gun into the sewer.

He was taken by ambulance to a hospital, treated, and taken into custody. He's now being held on a $50,000 bond and is facing two counts of second-degree assault and two counts of armed criminal action. But that's not the end of the story.....(see part 2 later today). 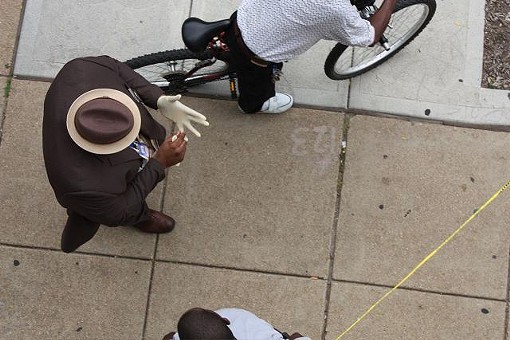