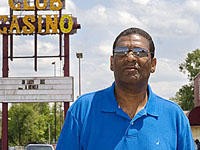 On March 19, leaders from across the metro east gathered at a news conference and demanded that East St. Louis Mayor Alvin Parks -- also the city's liquor commissioner -- make the nightclubs in his jurisdiction close earlier

A week after the press conference, FBI agents raided Parks' city hall office, removing documents that the major characterizes as an investigation of "unlawful solicitation of money regarding liquor licences."

Parks has since decided not to curtail the 6 a.m. closing time, but controversy continues to swirl. Police say the clubs are a magnet for violence and that shutting them down earlier might curb the city's late-night mayhem. Nightclub owners and patrons say they're being unfairly blamed for their city's crime woes.

In our news feature this week, RFT staff writer Keegan Hamilton investigates the scandal and controversy of Eastside politics, while painting a vivid portrait of the wild world that is the East St. Louis nightlife.