May 19, 2009 at 8:30 AM
comment
Am I the only one who finds the St. Louis Post-Dispatch's online comments threads endlessly entertaining, mystifying and downright unfathomable? Am I the only one who, when I'm of a mind to plumb the deepest recesses of the human soul, pulls up the ol' web browser and types in s-t-l-t-o-d-a-y-d-o-t-c-o-m? 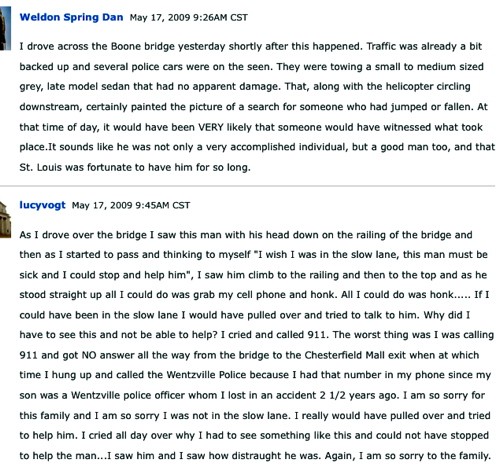 You probably are aware by now that Millstone, who's 102 years old, dropped from sight Saturday, apparently after taking some anti-anxiety medication that disagreed with him. He's believed to have jumped or fallen from the Daniel Boone Bridge into the Missouri River Saturday afternoon.

Millstone's construction company, now called Millstone Bangert, Inc., built Pruitt-Igoe and Busch Stadium (the one where "Ballpark Village" now stands) in the 1960s. The company built the Meeting of the Waters fountain across from Union Station. It built the double-decker concrete pile that is Highway 40 as it cuts through downtown, and it's now building the newly refurbished Highway 40 (I-64) as it runs westward from Kingshighway.

In recognition of the fact that Millstone remained indefatigable as he embarked upon his second century on the planet, this paper named him "Best Geezer" in last year's "Best of St. Louis" installment.

The man will leave an indelible mark on the community, and his exit -- assuming this was indeed it -- will be memorable as well.

I'm shooting for a graceful segue here, but damned if I can think of one. (When it comes to construction, I'm obviously not the writerly match of I.E. Millstone's bricks-and-mortar abilities.)

On Saturday, after Millstone disappeared and police descended upon the Boone Bridge (did Millstone build that too, I wonder?), the Post put up a brief piece under the byline of Nicholas J.C. Pistor. Pistor reported that Millstone had gone missing and that a witness had reported seeing an elderly man jump off the bridge, but that the search had been abandoned and that so far authorities weren't putting two and two together.

Shall we adjourn to the comments thread? Let's do.

Those familiar with the tonal range of online Post comments will find this group typical.

You've got your sympathy bytes, your "Hopefully, Mr. Millstone will be found safe and sound," your "[M]y thoughts and prayers are with the family. I hope he is ok."

You've got your skeptical "He was 102 and got from where to the Daniel Boone Bridge? ... It seems a little strange to think the two things are related without there being something being slightly 'off'...."

And, of course, your cynical "Clearly the husband did it."

But this being stltoday.com, things are gonna get curiouser. Ergo:

"Why should God 'bless' him? Isn't suicide a Commandment Violation? On the otherhand, maybe the suicider asked for 'forgiveness and absolution' just before losing consciousness, declaring 'Jesus is my Savior' thus securing life ever after in Heaven."

And lest Final Exit be left out, an afterthought from the same commenter: "...Maybe, just maybe, people like Millstone wouldn't have to jump off bridges if painless and private assisted suicide were legal (and responsibly regulated)? "

Perhaps fittingly, not-infrequent local political candidate (and former RFT advice columnist [you'll have to scroll down]) Bill Haas gets in the last word(s) on this thread  -- 402 of them to be precise, including these choice ones: "After a certain age, shouldnt we have a right to go as and when we choose without the lonely way Mr. Millstone chose? ...One day society and the law will let us. And as far as I'm concerned, the sooner the better. And for an update on my situation, for anyone interested, life could be better, but I try to get joy every day and am handling it."

The saga didn't end there.

Sunday's paper contained Pistor's updated account, supplemented by a brand-new comments thread that commenced with the two that top this blog post.

Following lucyvogt's cathartic eyewitness account came a reassuring "Lucy please don't feel guilty. It's pretty clear that he was determined to do what he did. I highly doubt anything you would have said/done would have stopped him...."

This being the Post comments thread, the fuzzy warmth soon gave way to a feller who goes by bigboy5: "102 and jumps to an obvious death. why are we spending tax dollars to search for at least a week for the body? its fish food. save the public some dough. search should be called off after 24 hours. who knows how far downstream it is."

I won't bore you with Bill Haas' rehash of his own previous comment. (Forgive him, he can't help it.) But VCDaedalus, youbetcha:

"One administrator of a retirement community told me that she had to completely evaluate her new residents, because many of them were taking two and three prescriptions too many. 'You wouldn't believe the carelessness' of prescribers.

"Perhaps Mr. Millstone wanted to die that way. Out in the open, quick, a brief time where you might even feel like you were flying. May have wanted to return to the river for reasons known only to him.

"Given a choice between that and a fluorescent-lit hospital room with acoustical tile over your dying eyes, electronic death-watch beetles all around you, and nothing but anxious faces and doc talk to expire to . . . I'd take the bridge and the open air and sky ANY day."

Still, this weren't no happy ending. So we'll conclude this stroll down Comment Thread Lane with the eloquence of one hitekredneck:

"hey bigboy5,go ##### yourself you lowlife scumbag.i have an idea,why dont YOU jump off a bridge and become fish food...oopps,sorry,any fish with any sense wouldnt want anything to do with your rotten piece of ##### corpse." 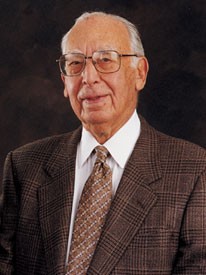