May 19, 2009 at 8:01 PM
comment
So I was looking around yesterday at all the teams still left in the NHL playoffs, and I have to admit to being more than a little shocked when I realized that there isn't a single Canadian team left in the hunt for Lord Stanley's Cup.
In fact, not only was I shocked by the absence, I was pretty disappointed, as well. After all, hockey is Canada's national sport, and the only real contender for that title. It isn't like here in America, where the NFL, NBA, NASCAR, and Major League baseball are all huge, viable commercial draws. In Canada, you've got Hockey, then curling, and then a guy boxing a reindeer, bare-knuckled, naked, in the dead of the Canadian winter. (Although, apparently Canada is the world's biggest trampoline superpower. Who knew?) And yes, both the curling and the reindeer boxing are completely awesome, but when it comes down to it, they just don't bring out the fans the way that, say, men driving in a circle six hundred times does.
So to see Canada so desperately underrepresented in the NHL playoffs is, to my mind, an absolute travesty. And after careful consideration, I think that I know what the problem is.
During the 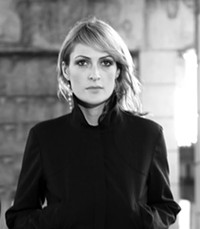 Leonard Cohen, "Please Don't Pass Me By (A Disgrace)"- Use the version from Live Songs, as it's easily the most rousing Leonard Cohen ever was. And so what if it's thirteen minutes long? Fuck it. Just keep playing the thing while play is going on. That way, even if the game sucks, at least you can clap and sing and weep and wail. Oh, and drink. Good times, man. Good times.
The Weakerthans, "One Great City!"- Come on, guys. Fess up. All of you that live in Canadian cities that still have teams secretly laugh at Winnipeg for not being able to hold on to theirs. What better way to both have great music in your barn and take a shot at the former home of the Jets than with this lovely tune, with a gem of a line like "The Guess Who suck/ The Jets were lousy anyway?" The refrain says it all: "I hate Winnipeg." Screw those guys, right?
Alanis Morissette, "You Oughta Know"- Hey, it's one of the five best songs ever written that contains an overt reference to fellatio. Not that that has anything to do with hockey, mind you; I just think it's the sort of thing that deserves a little recognition now and then.
-Interesting side note: one of the other songs that fits this category was also by a Canuck; Cohen's "Chelsea Hotel No. 2." I hated to put him on the list twice, though. It's just like I always say: If you want a good song about a blowjob, better ask a Canadian. Seriously. I say that all the time. Ask anybody.
The Arcade Fire, "Neighborhood #3 (Power Out)- You want big? You want rousing? You want something that's going to get the people in the arena PUMPED? This is it. Well, maybe not pumped, like, all in capitals, but still pretty pumped, you know? I mean, yeah, it's sort of like a really sad song too, sure, but you're still going to get pumped. Maybe not like mosh pit pumped, but like funeral pumped. Yeah, there we go. Pumped like a relative you really loved just died. But still pumped. Big time. Plus, it had that wicked cool Triplets of Belleville-style video.
Death From Above 1979, "Blood On Our Hands"- Let's face it, Canada; you guys aren't exactly known for hard-hitting, gut punch rock music. No, don't try to argue. You know you aren't. And that's okay. Nights that last for three months and cabin life aren't really conducive to rocking out, you know? But hey, these guys do it so good, the rest of your country doesn't have to. It's the sound of a hockey fight, all in one easy to digest, three minute explosion of goodness.
Sunset Rubdown, "Up On Your Leopard, Upon the End of Your Feral Days"- Why? Because it's my favorite song, that's why, and it's my damn column. So there. (And also because this might be the best thing I've ever seen.)
So come on, Canada. Let's make a comeback, shall we? You guys put this plan of mine into place, and I guarantee you'll be right back at the top of you game before you know it. If there's one thing America can never take from you, it's your Canadianity. (Yes, it's a word. Look it up.) Together, we can make this happen.