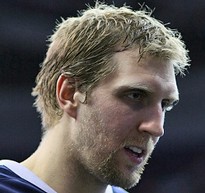 The sad, sad tale of Dirk Nowitzki's relationship trouble just keeps getting worse.
It isn't bad enough that the German-born basketball player's girlfriend, one Cristal Taylor (original name Crystal Taylor), was recently revealed as a longtime scam artist. Nor is it enough that despite Nowitzki being one of the most private professional athletes in the world, his personal business is now splashed across tabloids everywhere. Hell, even the speculation that this woman may actually be carrying the NBA star's child isn't the worst of this whole sordid tale.
No, the worst thing is this: Dirk was indulging in Tony Banks' sloppy seconds.
Man, really puts things in perspective, doesn't it?

You may recall, of course, that Tony Banks is the former Rams quarterback who was, um, well, what's the best way to say this? Is suckalicious a word? Maybe sucktastic? Or how about this: if Tony Banks were a beer, he would have excellent suckability. There we go. That's the one.

So anyway, a funny thing happened to Mr. Banks back in those halcyon days of the late '90s, when Dick Vermeil was just taking over as the Rams' head coach. Apparently, Banks had a short relationship with Ms. Taylor, who then went all psycho bitch on him, just when he thought everything was cool. Sounds like most of the women I date, am I right, guys? Guys? Right? Is this thing on? Um, what's the deal with airplane food? No?
Well, Tony had this friend in college, see, and this friend, well, he helped Tony out some with marketing and stuff after Tony was drafted. Sadly, when Tony chose to sign with an actual agent, rather than his buddy from school that kept telling him if he were a chemical, he'd be "Sodium Bro-Mide," his erstwhile friend apparently got his feelings hurt. That's when things got ugly. Tony's friend gave Taylor the contact information for the newly minted savior of the Rams, and, in Banks' own words, sicced Taylor on him.
I feel really bad for Nowitzki, but I just can't bring myself to take Banks too very seriously. His account of he and Taylor's relationship is just comic gold. A few of the highlights:

"She called me and wanted to see me; I said, 'No.'" Banks recalled. "She sent me her picture in the mail and she was just gorgeous. Me being a kid, thinking I was the best thing since sliced bread, I gave her a call and ended up dating her."


She was just gorgeous? Really? And here I thought Tony only had eye problems when going through his route reads. Also, I know sliced bread, and sliced bread doesn't have to rely on women sending it pictures in the mail. Sliced bread is out there just pulling that ass all day long.


"I remember she camped out in front of my crib one time when I had another female friend in town. She (Taylor) wasn't too happy about that."


Weird. I always remember people camping out and being pissed off when Tony failed to score at home. Turns out I had it wrong, I guess.

"She started making these harassing calls, trying to drag my name through the mud."


Maybe she thought she was a defensive end, because they drug Tony through the mud pretty regularly too.
And best of all, Tony believes that because of the situation with Taylor, Dick Vermeil began to have doubts about his level of maturity:


"It wasn't a good way for me and Dickie V. to start off," Banks said. "Dick thought about drafting Jake Plummer that first year because of this stuff."


Trust me, Tony, whatever stripper you were banging was definitely not the reason that the Rams thought about drafting another quarterback. I believe that I can say, without equivocation, that you should rest easy in knowing that Dick Vermeil didn't respect you any less as a quarterback because of this situation.
As for Mr. Nowitzki, I really do feel badly for the guy. He seems like a genuinely kind, trusting individual, who now unfortunately is forced to deal with the world seeing all his dirty laundry. But I do hope that maybe this can help us to establish some new rules for living. Can we all just agree right now that any woman who changes her name to that of a type of alcohol just isn't marriage material? And yes, that means that if you're dating Hypnotiq Sampson, you probably need to drop her.