Black Snake Fries. But Does it Moan? 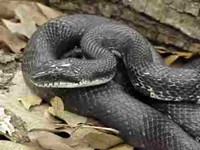 The Missouri General Assembly was in the final throes of the legislative session yesterday when the lights went out.

The power outage left the state's Capitol Building dark for more than an hour and trapped several people in a stuck elevator.

But the really odd news of the day is what caused the electricity failure. It wasn't a lightning storm or even one of those Enron-inspired brownouts. The cause was a black snake that slithered its way into the underground electric cables near the Capitol, causing two cables to short out.

The snake didn't survive the electrocution. I wasn't there, but I wonder: Did it moan?