Another Swing and Miss for Ballpark Village 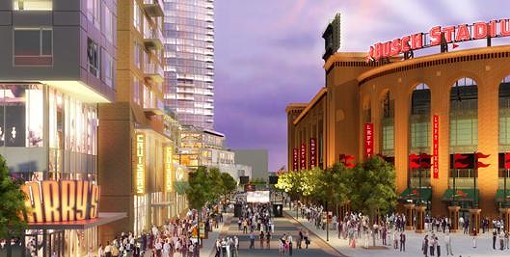 The much-delayed Ballpark Village near Busch Stadium was dealt another significant setback last week when law firm Polsinelli Shughart announced that it would not move into the proposed development.

In an announcement last Thursday, the law firm of nearly 80 local attorneys stated that it "had considered Ballpark Village as one of its options to consolidate the Clayton and downtown offices" but that "delays caused the firm to consider other alternatives."

The firm now plans to renew its lease in the Deloitte Building on 4th Street downtown and expand there by moving its Clayton offices into the building.

So, is anyone out there keeping track? How many companies do the Cardinals and developer Cordish have committed to actually locating to Ballpark Village? It's certainly not as many as appear on the development's swank website.