Unreal has been suffering a bit of malaise lately. There's been too much everydayness, in the words of Binx Bolling, the narrator of Walker Percy's The Moviegoer, which happens to be our Bible of malaise.

The best way to escape the malaise is to escape from everydayness. The most obvious way to do this is to take a vacation. But in case you haven't heard, we're living in recession times.

Fortunately, the St. Louis Convention & Visitors Commission is about three steps ahead of us. Yesterday in Kiener Plaza downtown, they hosted a Staycation Expo of all the fabulous things we can do in our own backyard. Sometimes Unreal needs a good kick in the ass. So downtown we went.

Our Staycation Expo experience did not get off to a very good start. For one thing, we'd forgotten that there was a Cards game today, so we spent a lot of time hunting for a legal parking spot, riding our breaks down Market Street, trying to avoid herds of elderly fans who were crossing against the light.

(Shouldn't they have learned never to do this in all their years on this Earth? Unreal swore a lot and then tried to cheer ourself up with a song: "Fuck This Town" by Robbie Fulks. OK, it's about Nashville, but we find the chorus universally applicable.)

Our mood improved when we found a parking spot where a bus stop used to be. The city hadn't gotten around to installing a parking meter yet. Score! 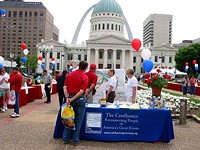 At the expo, we found a lot of two things that reliably lift our spirits: free food and swag. We collected a lot of brochures and a few other goodies, like a pencil (unsharpened) from the Musicians Association of St. Louis, a magnetic clip from the American Eagle Credit Union in Soulard, two cardboard fans (one courtesy of Alton, the other of the Tourism Bureau of Southwestern Illinois) and three strands of Mardi Gras beads.

A lot of the usual tourism suspects had shown up, like the Cardinals, the folks from the brewery (still calling itself Anheuser-Busch), the Saint Louis Symphony Orchestra, the Delmar Loop and Qdoba. A few downtown hotels advertised special weekend packages, presumably so you could pretend you'd left town and then go swim in a pool.

But we came across a few things we'd never heard of before, like the Živeli Serbfest, Double Key Treasure Hunts and Demolition Ball (a cross between basketball and lacrosse, played in bumper cars). 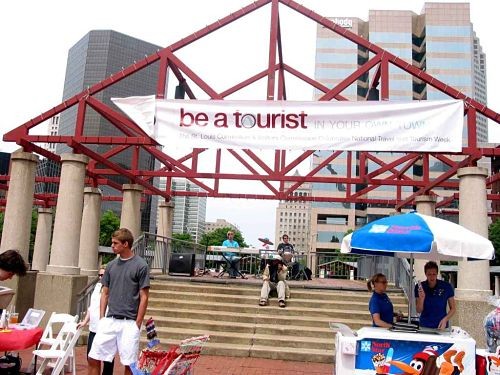 Most fascinating (to us, at least), was the trio of picturesque small towns, Kimmswick, Hermann and Defiance. All promised shopping, restaurants, bed and breakfasts and hiking and biking trails. But why should we prefer one to the others?

Kimmswick has the Blue Owl, home of the best pie in St. Louis (well, that's what we decided last year). Hermann has authentic German heritage and the Katy Trail. (The trail goes almost all the way to Kansas City. You could walk it, but its rep suggested it was more expedient to bike.)

We have to give the prize to Defiance, though. Not only does it have the best name, its tourism rep promised us it was not as commercial as Kimmswick (not yet, anyway). But the clincher: wineries. (Actually, Hermann has those, too, but the idea of German wine scares us.) It you have a group of six or more, he added enticingly, you can get a van to drive you to and fro, sparing everyone designated driver duty.