Baseball Card of the Week: Mitchell Boggs Steps Up 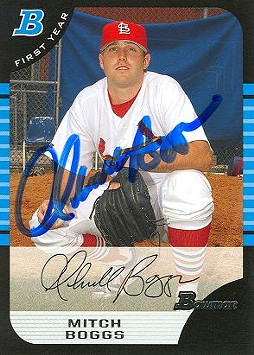 When Chris Carpenter went on the DL with an oblique injury, I must admit to feeling more than a little nervous about the Cardinals' rotation. There was some decent talent, yes, but the depth? Not really there. "If the Cards have to start reaching into the minors to try and fill the void on the pitching staff," I thought, "things could get ugly in a hurry."
So far, though, that hasn't happened. Look at the performance Mitchell Boggs turned in the first time he started in place of the Cards' injured ace. Before Boggs, P.J. Walters came up and battled in his first major league start, overcoming a pretty serious case of nerves to post a representative line against the Cubs in Wrigley.

Pitching against Chicago on April 25, Boggs threw 5.2 innings of effective ball, giving up a single unearned run on six hits, walking one and striking out three.

Five days later, against the Washington Nationals, Boggs was impressive, striking out nine Nats in six innings. He did get hit around a bit, but showed an ability to miss bats that had never really been apparent before. His last time out, Boggs fought mightily against himself, walking five Pittsburgh Pirates in only 4.1 innings, but kept the Cards in the game, with only two runs allowed.

But what's been most impressive about Boggs so far this season is just how far he seems to have come since last year.

He made a few decent starts in 2008, but for the most part, just looked undercooked. He had the good fastball, certainly, with velocity and movement both, but he failed to command his breaking pitch much at all, and really had no change-up to speak of. He looked like a middle reliever just waiting to happen, a guy with good stuff who simply didn't get much in the way of results.
This year, though, everything about Boggs seems to have taken a step forward. Despite his struggles in Pittsburgh, his command of his repertoire stronger this season. Where last year his slider looked like nothing more than a possible show-pitch that would have to be well off the plate to avoid getting killed, this year it's a tight, late-breaker with nice lateral movement and depth. The biggest difference, though, has been in Boggs' change-up. Before, it was never an effective offering, and was usually pointed to as the biggest reason he would likely end up back in a bullpen role. Now, though, it's a legitimate weapon against left-handed hitters, making it much more likely that Boggs will be able to stay in the rotation long term.
With a more effective, deeper repertoire, as well as (mostly), improved command, Boggs has impressed this season. All through the minors, he was seen as a power arm who simply lacked the pitches to consistently get swings-and-misses. Now he just may be figuring it out. Will he ever be more than, say, a Number 4 starter in the big leagues? Honestly, probably not. But producing Number 4 guys out of the farm system is how good major league organizations keep costs down enough so they can afford to sign the big names every now and again. Championship teams are often built on the backs of guys like Mitch Boggs.
At the very least, what we've seen from Boggs this season so far should most likely make Joel Pineiro expendable, and that's very, very good news.