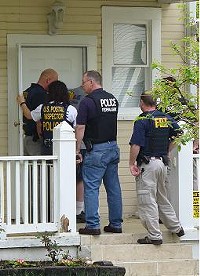 Federal agents this morning raided the home of a Guatemalan man deported from St. Louis in 2007 after losing a lengthy court battle to seek political asylum.

Roberto Castro had lived in the United States since fleeing his war-torn country back in 1991. He moved to St. Louis in 1992 and eventually started his own landscaping business while appealing a court's decision not to grant him asylum. In the meantime, Castro married a woman from Mexico. The couple has two teenage daughters.

After years of court hearings and additional appeals, Castro -- of the 3300 block of Oxford Avenue just within the city's border with Maplewood -- was deported in 2007 to his home country.

Agents brandishing pistols and dressed in flak jackets with F.B.I. and U.S. Postal Inspector T-shirts, arrived in unmarked cars at approximately 9 a.m. this morning. Castro's wife and daughters did not appear to be in the house at the time of the raid.

The officers entered the home approximately ten minutes after their arrival. Tracy Berry, a prosecutor with the U.S. Attorney's office would not comment on the nature of the raid. The search warrant and an affidavit for the raid have been sealed by the court until this Friday.

In addition to the family landscaping business, Castro's wife, Imelda Castro, has operated a maids service out of the home.