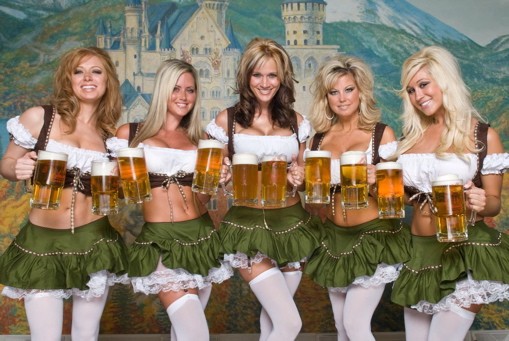 Now that I have your attention, take note: The Soulard Oktoberfest may be forced to move downtown this year.
Alderwoman Phyllis Young, the Historic Soulard Market Merchant's Association, and a handful of neighborhood residents say the annual festival, now entering its sixth year, has outgrown its location in Soulard Park next to the market and that drunken revelers wreak havoc on homes in the surrounding area.
"People in Soulard have never shown that they mind a party," Young says. "But they do mind a party that's not respectful of the neighborhood. The Oktoberfest people say they don't want to grow, they want it to be a neighborhood thing but revenue and crowds show they are growing and the neighborhood says 'We don't want another Mardi Gras.'"
"People get drunk at Mardi Gras but I've never seen people drunk like they are at Oktoberfest," adds Young, whose ward includes parts of Soulard, Downtown, and Lafayette Square. "They stand there urinating on a house and pulling flowers out of a flower box. They're falling drunk on the curbs."
Organizers of the festival, St. Louis' contribution to the global festivities held the first weekend of October to celebrate German culture and beer, maintain they have widespread support in the community and approval from many of the vendors in the market.
"If the neighborhood doesn't want us, then we're glad to go. But so far, the very opposite is true," says

"We don't have any beef or issue with Phyllis Young," McKinstry says. "She's trying to be the voice of people who are inconvenienced and we definitely want to address those problems."
According to Young, other problems created by the festival include taking up parking spots intended for market customers, blocking traffic on Lafayette Avenue (several blocks of which are shut down for the festival), and damaging city sidewalks by hammering tent stakes into the pavement.
Young says she was prompted to act after receiving several citizen complaints and a letter from the Historic Soulard Market Merchant's Association "expressing [their] strong opposition" to the festival. She adds that that if the festival organizers can't address these problems, she'll ask them to move this year's party downtown between Tucker and 14th St and Market St and Pine St.
Victor Wendl, president of the Soulard Oktoberfest Benevolent Association, the non-profit organization that runs the festival, says he's aware of Young's concerns and has taken steps to address them.
He says his organization now plans to shuttle patrons in from a nearby lot to cut down on parking conflicts.
Since the first Saturday of the month is the busiest day for the market, the group says it will move the festival on the second weekend to mitigate the conflict. He adds that they have plans to include a "harvest exhibition" so that farmers worried about losing business to the festival can set up booths along Lafayette Ave and sell their produce to festival attendees.
The price of admission will increase from $1 to $5 this year.
Wendl estimates that nearly 20,000 people attended last year's event.
He stresses the festival is not-for-profit, and that last year they gave nearly $60,000 to Soulard community organizations and $130,000 to the City of St. Louis.
"If we didn't have the support of the community we'd be gone," Wendl says. "But the evidence shows we have that support."