St. Louis Athletica Cut Off At the Knees 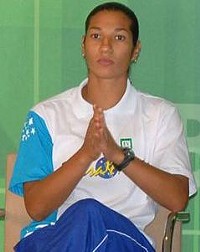 Daniela Alves, the Brazilian soccer player who looked to be the rising star of the St. Louis Athletica, is out -- indefinitely -- as of today.

The 25-year-old midfielder -- who goes by just "Daniela" -- got knocked in the left knee during a game on Sunday in Maryland and had to be carried off the field.

It was the Athleticas' fourth game, and Daniela became the team's "leading scorer" after netting two of the three goals in the 3-3 tie against the Washington Freedom. Daniela's goals were the team's first of the season.

The Athletica have 2 losses and 2 ties. They play at home this Saturday, 7 p.m., at the Ralph Korte Stadium at SIUE.