May 05, 2009 at 2:37 PM
comment
Today the world mourns the death of comedian Dom DeLuise, who passed away after a long illness.

Unreal mourns DeLuise too -- as we have mourned all of those who co-starred with him in Blazing Saddles and preceded him in death. Unreal is by no means a cineaste -- heck, we'd sooner bowl than watch a movie (any movie) -- but Blazing Saddles, a work of movie-making genius, occupies a special place in our heart.

Unreal knew the St. Louis Post-Dispatch was "partnering" with an outfit called Legacy.com to provide online obits. But we'd previously assumed the clientele was limited to the local citizenry. You know, a web-based version of the paid obituaries you see in most (if not all) print dailies. 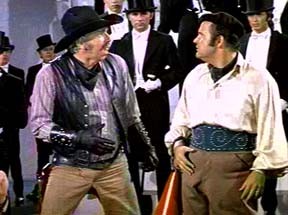 We never knew until today that whilst perusing the Associated Press obituaries of celebrities and other luminaries from around the globe we could, with a mere click of the ol' Logitech, post our own tribute in a virtual "guestbook" alongside similar heartfelt expressions of sympathy from folks all over!

How frickin' cool is that?

When we get finished waxing rhapsodic over Dom DeLuise, we're gonna buzz on over to Bea Arthur's guestbook, and Jack Kemp's.

By then we'll be all cried out.

Which reminds us -- the surviving star-studded cast of Blazing Saddles is thinning by the day...