Baseball Announcer Catch-Phrases are Hopelessly Out of Date 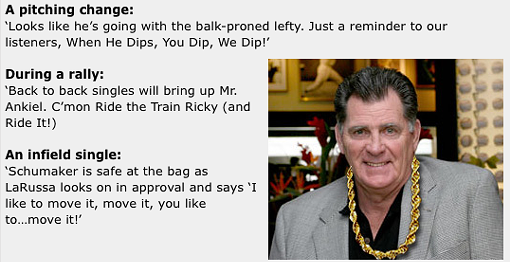 Baseball announcers are delightfully, hopelessly behind the times when it comes to coining catch-phrases to describe the on-field action. So much so, that when young bucks and young Bucks try to roll out a new one-liner, America collectively cocks its head in disgusted curiosity. A few probably paraphrase Jack Buck and say to their friends, "I don't believe what I just heard."

But with the excitement over the NBA playoffs reaching its highest level around these parts (thanks to the Bulls-Celtics soap opera), InsideSTL has wondered aloud what it'd be like if John Rooney or Mike "Hee-hee-hee" Shannon were to try to update their vernacular for the kids. And after reading the funny, but imagined back-and-forth between the Cardinals broadcasters, fans should be grateful the next time they hear Shannon's elongated "steeee-ruck him out."