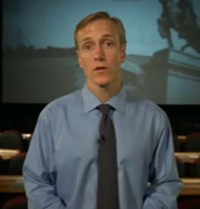 That headline courtesy of News 8 in Austin, Texas, where mayoral candidate Brewster McCracken has launched an Internet ad comparing the Texas capital to St. Louis.

The advertisement available on YouTube (McCracken has disabled the "embedding" feature that would have allowed me to post the video on this site) warns Austinites that if they don't change their city's direction, they could end up like St. Louis.

And that would be very bad, says McCracken because...

If you lived in St. Louis in 1904, you thought you were in the center of the universe. In 1904, St. Louis was the fourth biggest city in the nation. It became the third city in the world that year to host the summer Olympics. It also hosted the World's Fair. Today St. Louis is not among the nation's 50 biggest cities. Entire sections of St. Louis urban core have been abandoned for decades. There's a warning to cities all over the country from St. Louis' story. Just because you've had a great present or a bright past is no guarantee of a better future. We face challenges here in Austin today that are also warnings to us...

As someone who spent nearly two years living in Austin earlier this decade, I got to side with the Mayor Slay's office on this one. Austin will never have the challenges St. Louis faces.

For starters, Austin was never an industrial city and never will be. It's a white collar town buoyed by the limitless funds of state politics (i.e. lobbying), a booming IT industry, and grants from research and academics associated with the University of Texas.

As a result, Austin is an extremely wealthy city. Sure, it was somewhat affordable back in the '60s and '70s when a few bohemians and artists move there. But for the past two decades those people have been priced out of the market. Thus, the whole "Keep Austin Weird" movement that sprung up as yuppies began to supplant the town's hippies. When your biggest concern is keeping a town "weird," you've got a lot going for you.

And speaking of diversity, Austin rarely has to deal with the thorny issue of race that rears its ugly head each and every day in St. Louis. Sure, there are minorities in Austin (mostly Hispanic) but nothing approaching the numbers in St. Louis. Why's that? Because like the hippies they've been priced out of the market. Also, as mentioned, Austin never participated in the industrial movement of the early 1900s that brought scores of immigrants and southern blacks to St. Louis.

Austin is also extremely young when compared to St. Louis -- and I'm not talking about the age of its many slackers hanging out on the Guadalupe Loop and Sixth Street. I'm talking about its infrastructure and buildings. Yes, Mr. McCracken, some parts of our urban core are decrepit and abandon. But that's because they're freaking old! I remember laughing when an architectural junky friend of mine in Austin would drive me around town and gush when she pointed out a building as being old because it was built before 1900. I'd bite my tongue to not tell her, "Yeah? Come to St. Louis. Those buildings are a dime a dozen!"

Anyway, I could go on. Instead, I think I'll give it a rest and revisit ol' Brewster McCracken later today when I compile nominations for this week's ass clown.