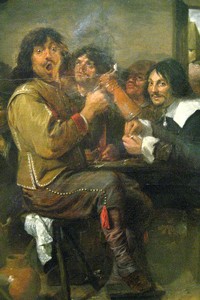 Alderwoman Lyda Krewson's bill banning smoking inside almost all public spaces in the city gets its first reading this morning in front of the Board of Aldermen.

The ordinance would only go into effect if/when the St. Louis County Council also enacts a smoking ban. Krewson's bill (available for perusal here) would ban smoking from a laundry list of places, including restaurants, bars, offices, stores, casinos, most private clubs and 80 percent of all hotel rooms in the city.

Smokers who light up despite the ban would be charged a $50 fine under the ordinance. Business owners or managers who fail to enforce the ban would pay more: $100 for the first violation, $200 for the second and $500 for the third. They'd also risk losing their business license. Anyone who retaliates against a smoking snitch, could also face a possible $500 fine.

But here is where the ban (if it is enacted) is going to face real problems...

the bill requires that the city's health department enforce the ban and not the police.

This leaves open the opportunity for smoking to go on unabated in St. Louis even with a ban.

Need proof of that? Just look across the river. Illinois enacted its statewide smoking ban last year. But go into nearly any dive bar or tavern in Alton (or any other southwestern Illinois town) today and you may as well stuff a bong full of Marlboro Reds and inhale -- deeply. You'd get fewer carcinogens that way.

That's because the state adopted its law without any clear enforcement measure. As a result, the state's undermanned health department was often left to follow up on complaints. And health department agents -- unlike cops -- generally don't work evenings when most smoking violations are likely to occur.

"Our police just don't have the manpower to send officers into bars to see if people are smoking or not," Alton's then mayor Donald Sandidge told me last year when I asked him about all the illegal smoking going on in bars in his city.

Yesterday, I talked to St. Louis health commissioner Melba Moore, who, herself, asked: "The question is, how do we enforce this at night?" Moore's department of roughly 200 emloyees works 8 a.m. to 5 p.m. with just a few officers on call for evening emergencies.

If the bill passes, Moore says she plans to sit down with the police and city sheriff's office to see how they might partner with the health department to enforce the ban.

"This is something that needs to happen for the health of the city," says Moore. "We'll figure out a way to enforce it."

Hmm. Something tells me Illinois lawmakers had similar ideas when they passed their ban.