May 01, 2009 at 2:28 PM
comment
Last night, the Cardinals saw yet another young man make his major league debut for the club. By my count, that's only four on the year, certainly not up to last year's cavalcade of kids standard, but the year is still young. 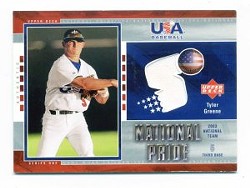 Tyler Greene joined David Freese, P.J. Walters, and Colby Rasmus in making his ML debut, and I would have to say it went pretty well for the kid.

Greene collected his first hit (and I don't care how that hit actually looked, it's a smoked line drive in the box score), RBI, and stolen base as a major leaguer, and didn't embarrass himself in the field. As first days go, that's not too bad at all.
So Tyler, here's your very own Card of the Week.
This week's card comes to us courtesy of my very own collection, which is a little odd, seeing as how I haven't really collected baseball cards since sometime around 1995. However, several years back, I had a gift card for a large national discount store that I had received as a birthday gift, and in the process of trying to spend $25, I ended up with about $3 left over, and standing there at the checkout, my eyes happened upon the packs of baseball cards sitting there.
Little did I know that, four years later, one of the cards found in that pack would come in handy. That's just what has happened, though, and Tyler Greene, who at the time was an Olympian, is now a Cardinal. The card is a 2004 Tyler Greene National Pride card from Upper Deck. In 2004, Greene was a student at Georgia Tech playing on the U.S. National squad, still a year away from the draft that would make him a Cardinal.
It hasn't been an easy road for Greene, whose problems making consistent contact have been well-documented. He was taken in the first round of the 2005 draft with the 30th overall pick, two spots after the Cards took Colby Rasmus with the pick they received from the Red Sox in compensation for Edgar Renteria. At the time, he was already much what he is now: a toolsy shortstop with the range and arm to be outstanding with the glove, as well as a power/speed package that made him extremely intriguing with a bat in his hands. Even at Georgia Tech, though, Greene often struggled to make contact, hitting only .273 his sophomore season. He bettered that mark by a full 100 points his junior campaign, though, and his package of tools made him a surefire early-round draftee.
After being drafted in '05, Tyler split time between short-season ball in New Jersey and High A Palm Beach. He hit .265 between the two levels, and showed plenty of that tantalizing athleticism that made scouts take notice, stealing 19 bases and playing outstanding defense.
The next year, 2006, saw Greene take a significant step backward. Beginning the year at Palm Beach, he bombed out of the gate, posting an OPS of only .632 in a little over 300 plate appearances. Demoted to Quad Cities, he turned it around and showed off his talent in a big way, with an OPS of .927 in 256 PAs. All told, he hit 20 home runs and stole 33 bases in 36 attempts. Starting to see why he's such an intriguing talent?
And that, for the most part, has been the pattern with Greene ever since. He has alternated signs of definite promise with frustrating performances, constantly teasing with the prospect of  just what he could be. The only constant, really, has been that maddening lack of plate discipline. He spent both 2007 and most of 2008 at Double A Springfield, and posted virtually identical OPS numbers of .752 and .753. Late in '08, he was promoted to Memphis, even though he hadn't really done all that much to earn it.
Coming into 2009, Greene faced a bit of a make-or-break season. At 25, he's certainly not old, by any means, but he is reaching that age that prospects lose their prospect status, one way or the other. They either lose it through performance and become major leaguers, or they drift into Quad A status, a guy who could just never quite get over the hump.
In spring training this season, Greene showed an intriguing new development: actual patience at the plate. It was widely noted, as that had always previously been his Achilles' Heel. And wonder of wonders, it looks as if Tyler may just have carried that patience into the regular season with him. He's still striking out at a fairly high rate, with 17 K's in 86 total plate appearances, but he also has 12 walks in those appearances. You can live with the strikeouts, certainly; strikeouts themselves aren't an actual problem, of course, and they're much preferred to constant double plays. The problem with strikeouts is what they tend to say about the ballplayer's tool set. Guys who strikeout a lot simply don't make a lot of contact, and that appears to hold fairly true with Greene. The question will be whether or not he can maintain anything close to that walk rate going forward. If he can, the high strikeouts won't mean a thing, and he could very well end up being a real contributor. If not, well, he'll just be the same guy he's mostly been all along.
The bottom line is this: Tyler Greene is a tremendously gifted player, with physical tools to spare. He's easily the most talented base-stealer in the Cardinals' system, having maintained a success rate of more than 90 percent comfortably for most of his career.

He's got some real pop in his bat, too, which certainly makes him even more interesting. The main thing that has held him back all through his time in the minor leagues has been his plate discipline, and he has certainly improved in that area. Whether or not he can carry that forward will be the biggest single factor in what sort of player he ends up being.
For now, though, he has his first hit, his first RBI, and his first stolen base. What more could a ballplayer ask for?