Yovani Gallardo is Better Than the Cardinals 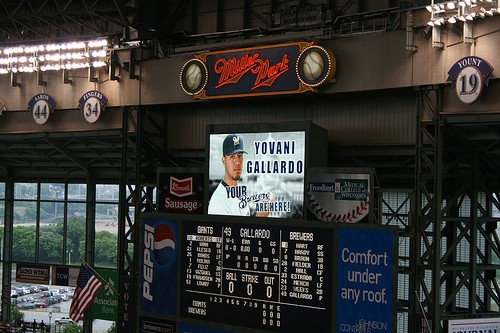 You may not be all that familiar with the name yet, but trust me, you will be very shortly. Yovani Gallardo is probably the best young pitcher in the game that no one knows, and he gave us a game for the ages last night. In fact, he came as close to single-handedly beating a team as you're ever going to see.
Against the Pirates last night, Gallardo, pitching for the Milwaukee Brewers, put up the following pitching line:
8 IP, 2 H, 0 R, 11 K, 1 BB
Now that's a pitching performance. But wait, he said in his best Billy Mays voice, there's more!
Gallardo also accounted for the only scoring in the game when he homered in the seventh inning. The Brewers won, 1-0, but you could just as easily say that the Yovani Gallardos beat the Pirates. After all, the rest of the team really just flat out didn't have all that much to do with the outcome.
And best of all, Gallardo having such a monstrous night gives me an opportunity to once again pour salt into one of my very favorite wounds, that of the 2004 draft. The Cards, you may remember, passed on Phil Hughes (who turned in his own rather impressive outing the night before last), Gallardo, and Dustin Pedroia (certainly wouldn't be reduced to converting outfielders to second base, now would we?), to take Chris Lambert. Lambert is currently property of the Detroit Tigers, and is putting up a 4.76 ERA for their Triple A club. The Cardinals received Mike Maroth in exchange for Lambert's services; Maroth is currently, um, well, I'm not really sure, honestly. He hasn't pitched in the majors since 2007, and a glance at his blog reveals that he himself hasn't really had much to say about what's going on since March. Of last year. (On a related note, congratulations to Mr. Maroth on the birth of his most recent child.) He apparently was trying to catch on with the Toronto Blue Jays this year, but I can't find much of anything on how it went for him.
So what do the Cardinals need to do in order to better beat up on those pesky Pirates of Pittsburgh? They just need to build a time machine, go back to 2004, and draft Yovani Gallardo!
God, it just sounds so simple, doesn't it?