By the Boards: Dennis Brown on the STL Theater Scene April 30-May 3 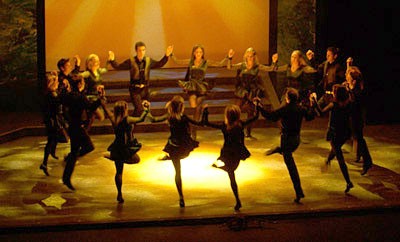 Some musicals continue to tour long after they've worn out their welcome. The orchestra grows thinner on each repeat visit, and the productions seem a little further removed from our initial memories. But I would expect Riverdance, which returns to the Fox this weekend for five performances between Friday and Sunday in what is being billed as the "farewell performances," to evoke its full frenzy.

First developed in 1994 as a seven-minute interlude to showcase Irish musicians, dancers and singers while the judges' votes were being tallied on the Eurovision Song Contest (think American Idol), the piece was such an instant success that it quickly grew into a full evening. The expanded piece premiered in 1995 in Dublin. But Riverdance earned its designation as an international phenomenon when it traveled to New York City and played Radio City Music Hall in March 1996. From that time on, the journey has never stopped.

His initial concept was to evoke the life of a river (probably the Shannon, which bisects much of Ireland) from its source until it rushed out to sea at the estuary. But as the piece filled out, Whelan added songs that praise the earth, sun, fire and the moon -- elemental forces to which people everywhere can respond. The show also tells the history of Ireland. A number like "American Wake" visualizes how poverty and famine forced millions of Irish to emigrate to the United States in the mid-nineteenth century.

But audiences don't attend Riverdance for the history. We cannot overlook how sensual the piece is. For as long as anyone can remember, the national Irish dance was a kind of clog that, in its insistence on keeping the upper body immobile, seemed to suppress sensuality. But in Riverdance composer Whelan introduced sensuality to Irish music. "The Irish have very often separated sex and spirituality as if they were unable to co-exist in one human being," Whelan once said. "I am strongly of the view that a spirituality without sexuality is arid. Sensuality is what much of the work is about." And indeed, in numbers like the title song and the opening "Reel Around the Sun," the stage throbs with a kind of orgiastic splendor.


This weekend also marks the final opportunity to see Woyzeck from Upstream Theater. Georg Buchner's unfinished tragedy has been adapted by director Philip Boehm, who has assembled an impressive cast comprising some of St. Louis' finest actors.

Finally, this is your last chance to see Colleen Backer's satin-smooth performance in The Good Times are Killing Me at Mustard Seed. This is the ideal blending of actress and material. How do we know that? Just try to imagine the play without her.