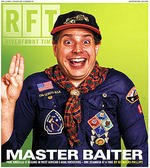 Every year, thousands of Americans are suckered out of hundreds of thousands of dollars by a burgeoning number of West African e-mail hucksters. Law enforcement agencies have done little or nothing to track down these far-flung perpetrators. Enter Paul Kinsella of New Athens, Illinois.

In this week's feature, RFT writing fellow Nicholas Phillips delves deep into the mindset that governs this full-time -- and quite obsessive -- scam baiter. As Kinsella put it, "I like being a jerk." And, as you'll see, he's darn good at it. For your reading enjoyment, I heartily recommend "Master Baiter."

In our News Real, writer Kristen Hinman skillfully chronicles the story of Frederick "Fritz" Lehmann and how his family's prized and extremely expensive Chippendale chairs went missing years ago -- only to turn up earlier this month inside the Botanical Avenue dining room of a St. Louis attorney.

Also on tap this week, our sagacious theater critic Dennis Brown fires off some critical commentary in the "verbal quicksand" that has all but doomed this particular adaptation of Kafka's The Trial at the Tower Grove Abbey .

Restaurant reviewer Ian Froeb, meanwhile, pays a visit to Dressel's in the Central West End and finds that the old faithful establishment, more than 30 years later, hasn't lost a beat.