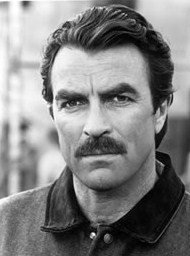 A city cries out to you, Swingin' Dick, and it cries, "Why? Why did you throw it all away, Dick?" In fact, I have it on good authority that Paul Simon and Art Garfunkel are reuniting to record a new version of "Mrs. Robinson," updated to include Dick and his erstwhile partner in place of Joe DiMaggio.
Second, and I hate to even frame this question, did Dick take advantage of the power of the mustache and then coldly turn his back on it?
The American Mustache Institute, through years of dedicated research, has quantified the benefits that a really great mustache can give a player. You look at Rick's performance in the early part of the season, then what he did after he went to the "Sabotage" look, and I think it's clear that he reaped the benefits of the mustache. Yet even after accepting the aid, the performance-enhancing benefits, Dick turned away from the mustache, refusing to accept his responsibility as a bearer of the sacred.
When Mark McGwire broke the home run record in 1998, did he then kick a syringe in the balls? No! He stood up before Congress, and accepted his responsibility to protect the author of his success, even at the cost of public ridicule. He told the nation's highest elected body that he wasn't there to talk about the past, refusing to throw his benefactor under the bus. Swingin' Dick could learn a thing or two from Big Mac. Or Barry Bonds. Bonds sent one of his closest friends in the world, Greg Anderson, to prison rather than sell out his performance enhancer.
But not Dick. He took the mustache for all it was worth, riding that wave of power to an acceptable, non-Mendoza Line batting average, then just shaved it off. Are you kidding me?
Dick move, man. Dick move.