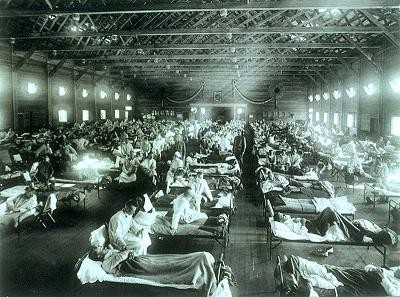 Amid all the hysteria in the media this week about swine flu (i.e. Did anyone catch Larry Connors last night gravely reporting "live" outside a medical company that builds respirators!?), at least one story out today provides some historical context to the outbreak.

Over at stltoday.com, reporter Tim O'Neil has the interesting tale of how a local doctor managed to save thousands of lives in St. Louis during the Spanish influenza pandemic of 1918 that claimed tens of millions of lives worldwide.

Dr. Max C. Starkloff, the city health commissioner back then, convinced Mayor Henry Kiel to close all schools, churches, theaters and dance halls following the first evidence of the flu in St. Louis. Starkloff's decision didn't win him many friends among the business and religious community, at least not initially.

Per the stltoday.com article:


Starkloff's strategy was "social distancing," the simple practice of keeping people away from one another. During the brief but deadly sweep of the flu that fall, the death rate in St. Louis was 2.8 per 1,000 residents, lowest among the nation's major cities. The rate was 8.0 in Pittsburgh, 7.6 in San Francisco and 7.1 in Kansas City.

Businessmen whose sales plunged beseeched City Hall to loosen the rules. Catholic Archbishop (later Cardinal) John J. Glennon urged Starkloff to reopen the churches. But the son of a German-born doctor held firm and had the trust of Mayor Kiel, who told Starkloff, "I don't want anyone to die. Therefore, I shall support you."