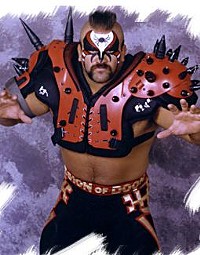 This post would probably fit best in our sports blog The Rundown. But, hey, they've had three days to comment now and haven't. Fair game, I say.

Besides, what I'm talking about (St. Louis Rams football and professional wrestling) hardly qualify as sports. Not real sports, anyway.

So, in case you haven't heard, the Rams picked Ohio State linebacker James Laurinaitis during the second-round of the NFL draft Saturday.

Laurinaitis' father -- Joe "The Animal" Laurinaitis -- is the sole surviving member of The Road Warriors, a tag-team duo that lit up professional wrestling during the 1980s and early 1990s.

He also happens to be a motivational speaker, according to The Road Warriors website.

Hmm. Now let's see. Who could use a bit of motivation these days? Could it be the 3-13 St. Louis Rams? I think so.