Brace yourselves, St. Louisans. The 2009 United States National Chess Tournament is coming to the Central West End's very own Chess Club and Scholastic Center of St. Louis. Prepare to be disabused of the notion that chess is staid and dull.

"Chess players can get rowdy," says Chess Club spokeswoman Laura Slay. "Most people don't understand that chess is one of the most grueling sports."

Starting Friday May 8, 24 chess players from all across the country will gather here to compete for the national title, a place in the international tournament and, incidentally, more than $200,000 in prize money.

Among them is St. Louis' very own National Master Charles Lawton, who has entered the tournament as a wild card.

And we'll have the chance to watch that grueling competition firsthand.

The three-story Chess Club building, Slay says, will be all tricked out with video cameras and flat-screen monitors so spectators can watch the matches live. There will even be color commentary. And there will be more monitors in the front window so you can enjoy the chess with a cup of coffee from the Companion Bakeshop or a glass of wine from Brennan's.

(You'll probably need it. Slay says each of the nine rounds lasts five to six hours.)

If that's too much for you, you can also watch a live stream on the Chess Club website. 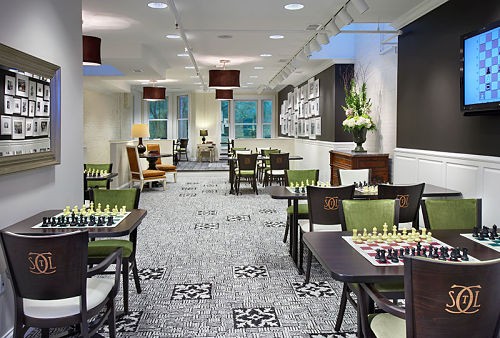 The Chess Club is determined to turn St. Louis into Chess City, USA. In addition to the live matches, the Saint Louis University Museum of Art will be having a special exhibition of chess-themed art by Marcel Duchamp.

Duchamp was such a chess fiend that his wife listed the game as a correspondent on their divorce papers and, in a fit of pique, glued all his chess pieces to the board.

Yes, chess is the sort of game that rouses the passions.

"It's underappreciated in this country," says Slay. "We're hoping to change that."