April 27, 2009 at 1:15 PM
comment
Ah, the smells of spring! The sweet perfume of lilacs and cherry blossoms. The comforting scent of dirt after a gentle rain. Makes you want to inhale deeply, to store up all these evanescent odors to sustain you through another blazing-hot St. Louis summer, right?

(And beware those who venture past the jump. It's pretty grisly back there.)

Artyom Sidorkin, a 28-year-old man in the Central Russian city of Izhevsk, checked into a local hospital a few weeks ago. Sidorkin was coughing up blood and complained of a pain in his chest, reports Komsomolskaya Pravda Daily. 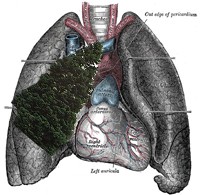 An X-ray showed that there was something in Sidorkin's lung, probably a tumor. Doctors at "I blinked three times, and thought I was seeing things. Then I called the assistant to have a look," Dr. Vladimir Kamashev told Mosnews.com.

It was indeed exactly what it looked like: a five-centimenter-long fir tree. The needles had been pressing into Sidorkin's capillaries, which caused the bleeding.

It is unclear how a fir tree ended up in Sidorkin's lung. The prevailing theory is that Sidorkin inhaled a tiny bud, which took root (or something) and began to grow.

"It really hurt a lot. But I never felt like I had an alien object inside of me," Sidorkin said.

Komsomolskaya Pravda has graciously provided the real picture of the biopsy.

Apropos of Nothing Food Science & Technology