Who Are You, and Where Have You Stashed the Real Joel Pineiro? (Oh, and Please Don't Bring Him Back)

April 23, 2009 at 1:47 AM
comment
I don't know what the hell has gotten into Joel Pineiro these days, but I'm certainly not complaining about it. After being given a variety of rather unflattering nicknames last season for his brutal performances, including El Pinata (fairly self-explanatory), and the Re-Gifter (because whatever lead you hand him, he's just going to give right back), Pineiro has come out this year looking downright -- dare I say it -- competent.
Pineiro put the kibosh on the Mets' offense last night; no easy feat, considering the amount of firepower present, particularly of the left-handed variety. He had outstanding movement low in the zone, and threw a ton of odd, turnover fastballs that I don't believe I've seen from Joel before. I'm assuming this is that mythical sinker we were all told that Joel was going to feature last year, just before he went out and got his tits lit up twice a week for six months, and then told about again this spring. If so, I have to say, I really, really like it.
Of course, now I have to worry about Joel getting another contract from the Cardinals; after all, the last time he threw a gem like that against the Mets, it led to his current deal. And shiny new screwball-looking sinker pitch or not, I simply cannot handle a couple more seasons of dreading the next start from Pineiro. It just ruins too much of my week. 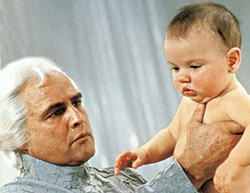 Oh, and one last thing. I don't know anyone down at FSN, but if any of them happen to be readers of this blog, I need a favor. I need for Cal Eldred to interview Pineiro before a game as a weekly feature, and I want it to be titled, "Cal El on Jo-El." Think you guys can arrange that for me?
Hello? Anyone? Is this thing on?