Watch Out Moles -- This Year Sweeney's Has a Camera!

April 23, 2009 at 10:25 AM
comment
For the third year in a row, Sweeney's, the South County-based lawn vermin eradication experts, are sponsoring their "I Hate Moles Because..." contest. It may be hard to top last year's winner, Brenda of Chesapeake, Virginia, who composed a heart-wrenching poem, "'Twas The First Day of Spring" which begins thus:


'TWAS the first day of Spring, and as I stepped upon my lawn,
Not an inch of grass was undisturbed, my beautiful grass was gone!
The tunnels and mounds, made by moles and voles with care,
Were running in all directions, chaos and destruction everywhere! 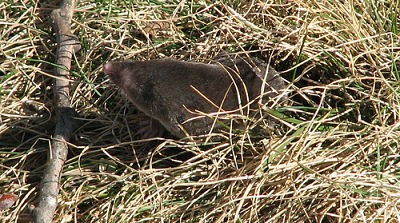 Okay, so Brenda owes some of her literary success to Clement Clarke Moore, but hey, she got a $500 Lowe's gift certificate out of the deal while old Clement got nada (except perhaps a little rodent pilgrimage to his grave).

This year, in a radical departure, "I Hate Moles Because..." contestants can submit their entries via video.

To inspire entrants, the evil mole-killing geniuses have set up their very own MoleCam, featuring Roscoe the Mole happily diving through dirt. (Later, there will be backdrops like New Orleans and Hawaii.)

Stewart Clark, an owner of Sweeney's attempted to pimp the MoleCam in yesterday's New York Times. He was perhaps not as persuasive as he could have been:


Face it, this is not compelling television. We have to be cognizant of the moles; we want the moles to be comfortable, too. They really like being underground.

Well, Roscoe is kind of cute, too cute to stomp. And thus, the power of MoleCam.