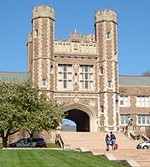 The blanket tobacco ban announced this month for all Washington University properties doesn't go into effect until July 2010, but that hasn't stopped critics from firing away on the ban already.

Today the Wash U. student paper, Student Life, has a lengthy editorial questioning both the merits of the ban and the quiet way in which administrators crafted the policy.


Our campus is supposedly based on principles of openness and transparency, and this is a ban likely to directly affect a significant portion of our population. Public health is an impossible initiative without public support, and the University made no aim to reach a public consensus before implementing its chosen policy.

The editorial raises further concerns that the ban may be too "heavy handed" and that it will ostracize smokers. It also questions why the policy bans all tobaccos, including snuffs and chewing tobaccos that don't emit harmful second-hand smoke.


If it is the aim of the administration to reduce the number of tobacco users on campus or create greater awareness among the student population, such aims would certainly have been better served by an extensive debate within the community. By allowing the student body a say in discussions on tobacco policy, the administration could have created a policy more in line with the views of those it seeks to aid.