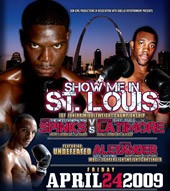 Hometown boxers Cory Spinks and Deandre Latimore opened their workouts to the media yesterday to promote their "Show Me in St. Louis" title fight this Friday night at Scotttrade Center.

As these things go, the media interviews allowed the fighters plenty of time to trash talk their opponents.

I don't know about you, but I wasn't impressed with the verbal jabs from either Spinks or Latimore. In fact, when it comes to tongue lashings, it's no wonder these guys are "junior middleweights."

Which is why I've crafted the "Completely Unofficial 'Show Me in St. Louis' Mad Libs."

Here's the deal. I'll give you the boxer's quotes (minus a few key words) and we'll see if you -- the reader -- can deliver an oratory knock-out better than the contenders.