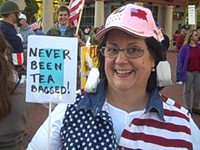 Voting wrapped up Sunday morning, and by a convincing margin Daily RFT readers chose everyone who attended last week's Tax Day Tea Party at Kiener Plaza as the biggest ass clowns of the week.

Congratulations tea baggers. When it came to embarrassing yourself in public last week, you licked the competition with 45 percent of the vote.

Second place (with 22 percent of the vote) went to David Dausman, the allegedly crooked Wellston cop accused of drug running, counterfeiting and patronizing a prostitute. Coming in a close third -- by just one percentage point -- was columnist Sylvester Brown, who accused the Post-Dispatch of racial discrimination and retaliation following his firing last week. (Brown's boss, Arnie Robbins, came in a distant fifth place with just five percent of the vote.)

Thanks everyone for playing, and feel free to drop me an e-mail this week with your own ass clown nominee. Here's a nifty pie chart of this week's results.